CBA news: Proposal to save 82 game season. NHL proposal wasn’t met with great enthusiasm. Players say 50-50 a lot closer to a deal but it’s certainly not an automatic. Breaking down the NHL’s latest proposal. NHL players would be crazy to turn down the latest offer from the league. NHL tables new offer that proposes 50-50 revenue split. Cautious optimism as NHL players examine league’s offer. Where would the NHL be if Bain Capital had bought the whole league in 2004-05?

NHL news: The city should move ahead on new arena without Katz. US Hockey Hall of Fame ceremony celebrates American icons.

Winnipeg Free Press: NHL players in hold-your-horses mode.  What a surprise, the players are in damage control mode as they know fan support is going to quickly shift to ownership.  Best bet to avert this (if that is possible) is a quick counter-proposal from the Players Association.

Winnipeg Free Press:  Thorburn feeling fine about future.  Good to hear from the guy who put the T in the GST line.  Training in Atlanta, he sounds eager to be back to playing hockey. 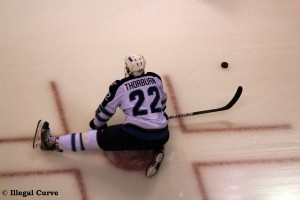 Winnipeg Free Press:  Ladd cautiously optimistic about proposal.  Perhaps if the players put forth something instead of pointing out the weak points in the offer made by the NHL we would be farther ahead in this process.  Obviously not being ‘too enthusiastic’ is a play by the PA to not lose any leverage but it would be a mistake for players to go down that road.  Fans have zero tolerance for machinations.

CTV News:  Jets fans hope NHL proposal will clinch start of hockey season. Fans across the city and Province were abuzz with the news yesterday that the NHL had made a proposal.  Hockey-mad fans are over eager to see the NHL re-start and many are already counting down the days till a potential November 2nd start date.

TSN:  Mark Chipman as its Executive of the Year.  I’m sure he would prefer to see his team winning on the ice instead of winning personal awards off it.

Sportsnet:  2012-13 Preview – St. John’s IceCaps.  Some of the offensive weapons listed (Burmistrov, Postma) might be heading back to Winnipeg if the NHL lockout ends soon.  Of course while it remains ongoing, these players will benefit from continued development in St. John’s.

NHL.com:  Proposal to save 82 game season.  Love the way the NHL titles this article as if this is an act of benevolence.  At least they are presenting fans/players with all the details of their offer.

Winnipeg Free Press:  Players say 50-50 a lot closer to a deal but it’s certainly not an automatic.  Nothing in life is certain except death and taxes so fans shouldn’t assume that this offer will be a slam dunk to getting a deal done.

Toronto Sun:  Breaking down the NHL’s latest proposal.  In any negotiation, there are going to be things you like and things you don’t, and this is no different.  Playing an 82 game season after cutting out a month is going to be quite a lot of fun.

Montreal Gazette:  NHL players would be crazy to turn down the latest offer from the league.  Depending on how extreme the PA wants to be, we will have to wait to hear the official response from Fehr and company.

Globe and Mail:  NHL tables new offer that proposes 50-50 revenue split.  And now we wait for the NHLPA to respond.

National Post:  Cautious optimism as NHL players examine league’s offer.  As with Andrew Ladd above, players won’t be jumping for joy just yet.

Deadspin:  Where would the NHL be if Bain Capital had bought the whole league in 2004-05?  Until reading this article I had forgotten about this proposal from Bain Capital.  A very interesting concept, although a proposal that never would have been accepted by the NHL or the 30 owners.

Edmonton Journal:  The city should move ahead on new arena without Katz.  Katz is not making any friends in Edmonton with his demands and fake exploratory trips to Seattle.

USA Hockey:  US Hockey Hall of Fame ceremony celebrates American icons.  Another great group of players and executives headed to the US HOF at the Dallas ceremony.

Illegal Procedure: Winnipeg Blue Bombers Papers. If you are a fan of CFL football, check out our other site, which gives you all the latest Bombers news. We learned yesterday that the post season dream is not quite over. The Bombers can only focus on winning although they know that their fate lies in others hands.