Jets news: Slater family meets bears. Games and salaries disappear with no end in sight to NHL lockout. Eagles Weekly. Dekanich turns in a Whale of a performance.

Winnipeg Free Press:  Slater family meets bears.  With no hockey news, what the Jets are doing on family vacations is the next most reportable item.  Let us hope the lockout ends soon.

Winnipeg Free Press: Games and salaries disappear with no end in sight to NHL lockout. Aside from the fact that Kenora product Mike Richards joined the Jets for a skate, not much news. 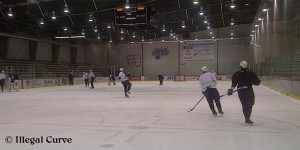 The Telegram:  Dekanich turns in a Whale of a performance.  While it sounds like the IceCaps were outmatched during the game, luckily for the team, they had Dekanick playing some inspired hockey for his first win of the season.

Northern Colorado 5: Eagles Weekly. A look back at the week that was and a look ahead at what Colorado fans can expect.

TSN:  NHL offers 50/50 split on HRR.  Wow.  This is contingent on an 82-game season beginning Nov. 2.  It is now up to the Players Association to respond.

National Post:  A running tally of lost ticket revenue and wages.  How has the lockout impacted NHL teams?  It was calculated that the Jets have lost an estimated $4,423,329.24 in ticket revenue so far.

Toronto Sun:  NHL hires GOP strategist.  While I am used to seeing him on CNN explaining a crowds reaction, this was a smart move by the NHL to get someone like Lutz working for them.  Probably should have been done before the lockout began but better late than never if you want to retain fan sympathy.  Of course if they are worrying about controlling fan emotions it probably doesn’t bode well for the negotiations.

New York Times:  Negotiations resume today.  Unfortunately according to NHLPA executive director Donald Fehr, he does not expect “substantive discussions” on the core economic issues dividing the two sides.  He also dismisses the idea that the PA is planning on providing another proposal to the NHL.

Arizona Sports:  Jamison, NHL ‘making progress’ on Coyotes sale.  Apparently there was a meeting on Monday but similar to the CBA negotiations, it appears nothing too substantive took place.

The Seattle Times:  Hockey hotbed? Some signs show support for NHL in Seattle. Perhaps the apathy or lack of interest is in part because the expectations that Seattle could become an NHL city was never taken seriously.

L.A. Times:  Story behind the photo of the Stanley Cup at the 9/11 memorial.  A powerful moment for the families of  Mark Bavis and Ace Bailey, the two Kings scouts who were killed on 9/11.  The Kings honoured their memories when they brought the Cup to Ground Zero.

TSN:  MacKinnon, Jones rated at top of season’s first ISS list. Pay attention to these names Jets fans as some prognosticators speculated that the Jets might be selecting someone off this list next year.

Orlando Sentinel:  Willie O’Ree turns blind eye to failure.  If it wasn’t enough that he was breaking racial barriers, he managed to do it with 95% vision loss in his right eye.  Simply amazing, considering the struggles he had to endure as it was.  Additionally consider this within the context of the pressure he likely felt to succeed.

Illegal Procedure: Winnipeg Blue Bombers Papers. If you are a fan of CFL football, check out our other site, which gives you all the latest Bombers news.   We learned yesterday that the post season dream is not quite over.  Hopefully today we might learn who the Blue plan on using as their starting QB.

Illegal Procedure:  Season on the Brink – Great Expectations.  Every year begins with promise and many Bombers fans are still trying to give this team as much of that as they can, even when it seems very evident that they cannot meet fans expectations.