Winnipeg Free Press:  Richest in more than money. Done in the typically quiet nature of the Jets co-owner.

Winnipeg Sun:  IceCaps sniper celebrates birthday in style.  Helping the IceCaps to their first victory of the season. 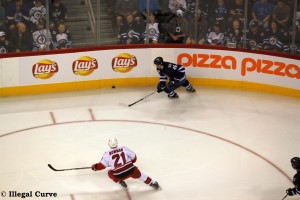 Harford Courant:  Whale Fall 3-2 to IceCaps.  Caps goalie Mark Dekanich got his first victory and Alexander Burmistrov helped out the cause with 2 assists.

MLive:  NHL, players union to resume CBA talks Tuesday.  Cannot wait for the inevitable news that the meeting broke up after 45 minutes with “not much progress” made.

USA Today:  What’s going on while the NHL isn’t.  They take a look at the games you would have enjoyed as well as the action that took place across the pond.

Chicago Tribune:  All eyes on AHL during NHL lockout.  Players who are willing to stay in North America during the lockout are enjoying the opportunity to impress the local team brass.

Chicago Sun-Times:  For Eddie Olczyk, dreams do come true.  The former Winnipeg Jets 1.0 forward is being honoured in Dallas as part of this year’s USA Hockey Hall of Fame draft class.

ESPN:  Stars aligned for Mike Modano.  He had a remarkable career in the NHL and will stand out as one of the greatest American born NHLers of all time.

Part 1:  CBA discussions.  Interview with Scott Burnside of ESPN.  World Cup of Hockey to return?  Rich Hammond leaves his job with the Los Angeles Kings.  The next Canadian television deal.

Illegal Procedure: Winnipeg Blue Bombers Papers. If you are a fan of CFL football, check out our other site, which gives you all the latest Bombers news.  Rumours of the Bombers demise might be incorrect as amazingly there is still a chance for the playoffs.  You cannot make this up.