Jets news: Stop the spin, we aren’t buying it. Wishing I could still be optimistic about NHL lockout. Sutherby does the dirty work for IceCaps. Postma staying sharp in St. John’s. Jets’ Ladd decides not to join KHL club in Siberia.

CBA news: Today’s NHL has enough perks, says Coffey. Eric Francis on the cancellation of NHL games. 50-50 split is NHL answer; find way to get there. How will the NHL placate fans and business interests once lockout ends. NHL should look to the success of revenue sharing in other pro leagues.

Note:  Tune into the Illegal Curve Hockey Show tomorrow from noon to 3 pm as the guys have 3 hours of hockey talk on TSN Radio 1290.

Winnipeg Free Press:  Stop the spin, we aren’t buying it.  I’ve been saying this from the outset.  It is insulting to fans when either side attempts to align themselves with the fans against the other side.  Players are not trying to maintain their salaries for the fans.  I’m fairly sure whether a player makes 4 million or 3 million per season is irrelevant to the average fan.  The same principal applies to owners, although fans might be more interested in helping to keep costs down since inevitably these get foisted on them.

TSN:  Wishing I could still be optimistic about NHL lockout.  Let us hope that the optimism Dennis has earlier shouldn’t be completely abandoned although with the news yesterday that the NHL was cancelling games until the 24th of October, this will be difficult.  Say goodbye to the home opener against the Hurricanes as well as two other games (Hawks and Capitals) which were supposed to take place at the MTS Centre.

Winnipeg Sun:  Postma staying sharp in St. John’s.  The Red Deer, Alberta native thought he was trading in the East Coast for the Prairies but until the lockout ends, he will need to continue his development on the farm. 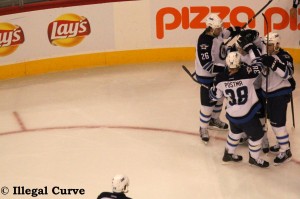 Winnipeg Free Press:  Ladd decides not to join KHL club in Siberia.    Knowing his wife was pregnant, he made the wise decision to stay in North America.

Star Phoenix:  Today’s NHL has enough perks, says Coffey.  One of the smoothest and fastest skaters of his time, he explains why both sides have points, although he comes across as more pro ownership.

Calgary Sun:  Eric Francis on the cancellation of NHL games.  Great read by Francis who hits the nail on the head in this article.

USA Today:  50-50 split is NHL answer; find way to get there.  Of course it is, but that is the pragmatic way of looking at things and we know neither side is willing to be practical.  We will hear “well we don’t believe that we are getting 57%, in fact it is closer to 53%”.  Well fans don’t really care.  It is a pig pie that they pay for and both sides are showing their greed during these negotiations.

Globe and Mail:  How will the NHL placate fans and business interests once lockout ends?  They have shown a callous disinterest in the plight of fans.  Why should fans matter, they only drive league revenues.  No big deal.  Perhaps they will be placated by the lure of “reduced ticket pricing”.

Globe and Mail:  NHL should look to the success of revenue sharing in other pro leagues.  While all other models should be looked at to help strengthen what the NHL has built, it doesn’t appear that the league is willing to budge off the paradigm they have created.

Illegal Procedure: Winnipeg Blue Bombers Papers. If you are a fan of CFL football, check out our other site, which gives you all the latest Bombers news.  With the weather starting to turn, does your interest in seeing the Blue decrease?  Or was that already the case