CBA news: Players awash in rainy-day funds. Owners would do well to listen to players. Fans have clout in lockout — but will they use it?

Winnipeg Free Press:  Andrew Ladd decides not to join KHL club in Siberia.  Turns out his wife is pregnant and he will not be heading to the KHL after all.

Winnipeg Free Press:  Jets brass still flying.  The coaching staff and scouts are certainly not locked out and they need to continue to work to develop this team, sans players, so once the season starts they will have a good idea how all these moving parts fit together.

Winnipeg Free Press:  Now it really hits home.  Unfortunately the weather is about to turn in Winnipeg and along with that cold gust of wind comes this reality, which likely means the cancellation of the start of the season is imminent.

Globe and Mail:  Andrew Ladd signs with Avangard Minsk of KHL.  As first reported by TSN Radio 1290’s Rick Ralph late last night, Andrew Ladd is the 2nd Canadian (first was also a member of the Jets, Evander Kane) off to the KHL. 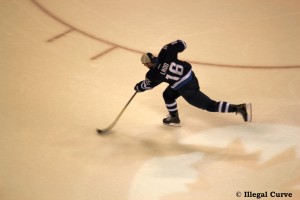 Winnipeg Sun:  Pasquale’s stock on rise in Jets system.  He had an impressive season with the IceCaps last year and coach Keith McCambridge seems high on his tender.

Winnipeg Sun:  Pasquale wants taste of big league, too.  It is good for the guys down on the farm to get a taste of life in the bigs to help them continue to strive to achieve their goal of one day making the NHL.

Winnipeg Sun:  Jaffray making full recovery with IceCaps.  Having had 2 serious injuries in the last few years you have to pull for the hard working Jaffray.

Winnipeg Sun:  Burmistrov turning heads with IceCaps.  As I said last week, he looked very good on the ice and hopefully for the Jets young gun, he will continue to improve under the coaching of the IceCaps staff.

Globe and Mail:  Players awash in rainy-day funds.  Simply put the players, it appears, won’t be in the same sort of cash crunch they encountered back in 2004-05.  Without this desperation, they might be able to maintain their position longer than previously expected, and that does not bode well for short term resolution of the lockout.

Globe and Mail:  Owners would do well to listen to players.  It is difficult to tell a billionaire how to run their business but most billionaires didn’t get to be in that position without listening to many different ideas/opinions and then ultimately doing what they think is best.  Perhaps it is time for the owners to give the players proposal another review.

Montreal Gazette:  Fans have clout in lockout — but will they use it?  It is hard for fans to boycott when the team has you locked in a contract for the next 2-4 years, as is the case in Winnipeg.   The biggest problem for fans is finding one single source to become their voice.  Instead there are tens of thousands of different voices that need to become unified.

Cherry Hill Courier Post:  Bobby Ryan spends spare time with Flyers.  Ryan made some very interesting comments during the interview including; “I think it’s important to stay here (in the United States) and be part of the solution and not just run from it”.

Toronto Sun:  Marlies coach responds to Cherry blast.  Without his usual forum for expression, the man who puts the coach in coaches corner, took to twitter to share his thoughts on the Leafs handling of prospect Nazem Kadri, and Marlies coach Dallas Eakins responded.

Montreal Gazette:  20 years since Manon Rhéaume made hockey history.  Who can forget the impact that she had and the waves her playing in the NHL caused.  She became a hero to women everywhere who wanted to be treated as equals.

Illegal Procedure: Winnipeg Blue Bombers Papers. If you are a fan of CFL football, check out our other site, which gives you all the latest Bombers news.  Still a few games to go and will we see a turnaround before it ends?