Hennepin County:  Dustin Byfuglien in trouble.  Looks like Big Buff may have been causing a ruckus south of the border.  Feel a bit like TMZ sharing this news.

Winnipeg Sun:  ‘Rocket scientist’ not needed to see Jets appeal.  While I agree that this seems to be a no brainer for TSN, it further solidifies True North’s financial position and will be a major revenue stream for the team.

Winnipeg Free Press:  2011-12 Jets Broadcast Schedule.  Who is ready to watch some hockey???  When you actually look at all those games, the reality of the Jets return manifests itself.

Winnipeg Sun:  New voice of the Jets.  The return of the Jets has people coming back to Winnipeg.

After the jump, Hnidy moves to the radio booth, a word from Barrie Colts coach Hawerchuk on 1st round choice Scheifele, more on the Jets 10 year deal with Bell Media.  In quasi IceCaps news (as it takes place at Mile One Centre), the town of Conception Bay has announced the Jets/Sens ticket distribution plans.  In the 3rd tragedy to grip the NHL this season, we got word yesterday that former NHLer Wade Belak passed away in Toronto.  From ‘Around the NHL‘ the Sabres are honouring Hawerchuk the same night the Jets come to town, the young gun Oilers wow factor, retired Osgood getting back to work with the Wings and it appears Marc Savard’s return to the NHL is in jeopardy.

Winnipeg Sun:  Hnidy moves to radio booth.  From the Stanley Cup Finals to his home province’s team, it’s been quite the year for this Manitoba son.

The Barrie Advance:  Colts back in Stable.  Mostly discussing the state of the Barrie Colts but Coach Hawerchuk mentions Jets 1st round draft choice Mark Scheifele.

“Mark’s such a great player but he’s also a good kid and my understanding is the Jets had a great interview with him,” said Hawerchuk. “I think originally everybody thought that Mark would be coming back here, but this kid could very well make the Jets. If he doesn’t we will certainly welcome him back. He’s an infectious kid, always has a smile on his face and can’t wait to play hockey.”

Globe and Mail:  Jets land 10-year broadcast deal with Bell media.  Can you say keeping it in the family?  Good move by True North.  Will keep one of their partners very happy.

CNW Group:   Conception Bay South announces ticket distribution details for Senators/Jets tickets.  You better get your name in for the public lottery for one of the 1600 tickets available via this method.

CBC:  Ex-NHLer Belak committed suicide.  Another tragedy in a summer of tragedy for the NHL.

Toronto Sun:  Another good man we thought we knew.  Sounds like a very good guy.

Buffalo News:  Jeanneret, Hawerchuk get the call.  Nice that the Sabres will be honouring Ducky the same night the Jets are in-town.  I think people in Winnipeg are hoping we can do something similar and get this image out of our minds. 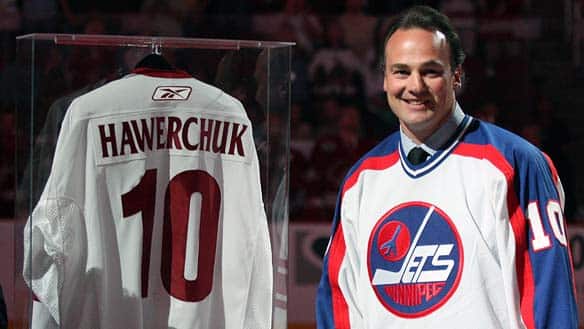 Edmonton Journal:  The wow factor at Oilers rookie camp.  I hate to admit it, but that’s going to be a lot of firepower in the coming years for the Jets to deal with.  I’m having mid 80’s deja-vu.

The Bellingham Herald:  Retired goalie Chris Osgood looking forward to role as mentor.  The Wings have a tendency to bring back former players and get the most out of them in new roles within the organization.

ESPN:  Marc Savard’s future is sadly no surprise.  Too many promising careers are being cut short.