NHL news: Shane Doan re-signs with the Coyotes. Oilers owner trying to milk taxpayers for all they’re worth.

Note II: Tune into the Illegal Curve Hockey Show today, which brings you 3 hours of hockey talk starting at noon on TSN Radio 1290. Rich returns to the booth and joins Drew and Ezra to talk all things CBA as Saturday represents the biggest deadline in the history of the re-born Winnipeg Jets 2.0. Guests include: Paul Edmonds (Voice of the Winnipeg Goldeyes), Ed Tait (Columnist, Winnipeg Free Press), Jack Edwards (Play by Play man on NESN, Boston Bruins).

Note III:  Congrats to the Winnipeg Goldeyes for winning the 2012 American Association championship.  The first since 1994.

Note IV:  Happy Birthday to me (yup self wishing myself a bday) but that’s fine considering I was up early to get you guys the morning papers this beautiful Saturday the 15th.  Birthday follow; @icdave

Winnipeg Free Press:  It’s come to this.  Free Press hockey writers Tim Campbell and Ed Tait will try to get you up to speed today with answers to frequently asked questions about this labour dispute.

Winnipeg Free Press:  Olli’s mad enough to spit rust.  Gotta love the fact that Jokinin isn’t trying to speak out of both sides of his face.  This quote “It’s about the money, it’s not about the game” in reference to the fact that both sides are simply wanting to making money, not improve the game.  Again, I’m happy to see both sides make tons of cash, but don’t try and disguise it as anything else.  When you do, it is too disingenuous and hockey fans can see right through it. 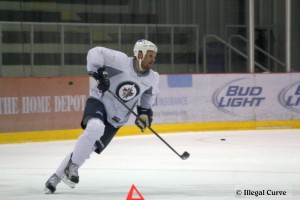 Winnipeg Sun: Jets fans unhappy as lockout looms.   Both fans and businesses look forward to the September rush as the weather outside turns chilly and fans thoughts turn to their hockey team.

Winnipeg Sun:  Many Jets plan to stay put, despite looming lockout.  Perhaps this can be seen as a positive that guys will stick around for a bit before making a decision on what to do this season.  With all the rhetoric being spewed by both sides however this ‘short term’ lockout seems unlikely.

Illegal Curve: Why hasn’t Evander Kane signed yet? Ezzy asks the questions that everyone who follows the Jets has been wondering all summer long. With the lockout expected tomorrow, it does not appear that a deal will get done. Is this a condemnation of the city by the Kane camp? Is it posturing by an experienced agent who is simply trying to get the most for his client? If the answer isn’t given before 11:59 pm on the 15th, then folks in Winnipeg might be waiting quite some time for the answer.

ESPN:  NHLPA denied immediate injunction.  Legal posturing.  Hopefully both sides will now turn to actually negotiating with each other and not via the Courts.

Minneapolis Star-Tribune:  Collective Bargaining Agreement Issues.  If you want a refresher on what the main issues are here ya go.

Edmonton Journal:  NHL spending defies logic.  It is the very definition of chutzpah(audacity) as Drew said on last week’s IC Hockey Show.  You are asking the players for cost controls and limited contracts and then you go out and sign players to big dollar, 5+ year contracts.  Perhaps the players shouldn’t be trying to save the owners from themselves.  Since the first NHL proposal of limited contract years, I believe 10+ players have been signed to deals longer than 5 years.  Yes it is within the rules but it doesn’t exactly synch up when you ask for one thing and then do the exact opposition.

Toronto Sun:  Odds in favour of long NHL lockout.  Have to love that anything in life can be turned into a Las Vegas bet.  Here are the odds for the various things that might be lost.

CBC:  A layman’s view of the impending NHL lockout.  Gord Stellick isn’t as positive as Ron MacLean (who said he thought the lockout would be avoided) but he gives some good information on the upcoming situation.

Sportsnet:  HBO’s 24/7 could be CBA pressure point.  Which is bad news for fans as it means they might be waiting until December to watch live NHL hockey again.

USA Today:  Shane Doan re-signs with the Coyotes.  I am quite surprised that Doan was willing to sign in Phoenix despite the uncertainty that remains with ownership.

FS Arizona:  Loyal Doan returns — much to Coyotes’ relief.  Doan should be commended for his loyalty to the only team he has ever played for.  He left a lot of money on the table (reportedly 4 years 28 million) to stick with the Yotes.

National Post:  Oilers owner trying to milk taxpayers for all they’re worth.  Always better to have someone else pay for your arena.

Illegal Procedure: Winnipeg Blue Bombers Papers. If you are a fan of CFL football, check out our other site, which gives you all the latest Bombers news.  Time to turn out the lights, the have Bombers left the building?