Jets news: Fans sound off as NHL lockout begins. Ponikarovky to join Donbass. And so it begins, hockey fans. Kane all locked up. Jets assign 13, including Burmistrov, to IceCaps. Jets will fly together. Jets send Scheifele back to Barrie. Lapeer native, fears start of NHL season will be delayed. Move teams north already.

CBA news: Message from the NHL. It’s time to turn off hype and hypocrisy. Stadium doors slam shut as CBA fails. NHL, NHLPA throwing it all away. The NHL lockout has officially arrived

R-Sport:  Ponikarovky to join Donbass.  Well that was quick.  According to reports the Jets newest free agent signing has agreed to play for the Ukrainian KHL team.  The team’s official site also has him listed as joining them but that is in Russian.

Winnipeg Free Press:  And so it begins, hockey fans.  It began without any official recognition from the NHL but fans knew what happened when the clock struck 11:59 pm EST.  How long before the two sides agree to start meetings up again?

Winnipeg Free Press: Kane all locked up.  The speculation is finally over.  Winnipeggers can breathe a sigh of relief that they have inked their young sniper to a multi year deal at the 11th hour. 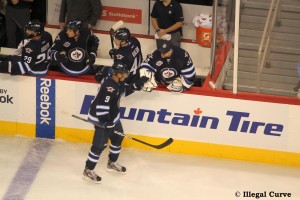 The Telegram:  Jets assign 13, including Burmistrov, to IceCaps.  But the question that everyone is wondering is what will Burmistrov do?

Winnipeg Sun:  Jets will fly together. As has been said repeatedly, this deadline isn’t the big one.  That would be in October when the NHL could start losing regular season games.   But for the most part the players remain united.

Winnipeg Sun:  Jets send Scheifele back to Barrie.  The Jets choose to send him to Barrie under the tutelage of Dale Hawerchuk.

Winnipeg Free Press:  Move teams north already.  Missed this article yesterday.  Is the solution simply replace weak markets with strong ones?  Would seem to be a pretty sound economic principal.

NHL.com:  Message from the NHL.  Well so much for the NHL not being disingenuous.  In the message they say “….the National Hockey League has been, and remains, committed to negotiating around the clock……” but the pace to these negotiations have been anything but vigorous.  The truth is the NHL has a number of anchors dragging it down, so does it need to change the economic model, or fix the teams that are killing their bottom line?

Globe and Mail:  Malkin and Gonchar sign KHL contracts, will other players follow?  Only a matter of time as the lockout stretches into weeks and possibly months, guys will look to the KHL and other leagues to supplement their income.

The Province:  It’s time to turn off hype and hypocrisy. Does the NHL think that just because the NBA and NFL did it, they can too?  Perhaps an overplay by the commissioner and company.  Will be interested to see, if there is any backlash.

Washington Times:  Stadium doors slam shut as CBA fails.   Now how will the proposals change.  Simply a matter of who blinks first.

ESPN:  NHL, NHLPA throwing it all away.  As the Doors once sung, “This is the end, the end my friend, the end.”  Both sides are making a big mistake with this ploy.  One that will only hurt them if the fans band together.

National Post:  The NHL lockout has officially arrived.    And to think I believed my birthday would overshadow the possible CBA news.  Guess not.

Globe and Mail:  With players officially locked out, where does NHL go from here?  Anyone have a guess?  Anyone?

Arizona Republic:  Shane Doan shows rare faith in sticking with Phoenix Coyotes.  He should be commended for sticking with the Yotes.

Illegal Procedure: Winnipeg Blue Bombers Papers.  If you are a fan of CFL football, check out our other site, which gives you all the latest Bombers news.  Time to turn out the lights, the have Bombers left the building!