CBA news: Crosby embraces leadership role in NHLPA. Who do you believe, Bettman or Fehr? Owners unanimously agree to lockout without new CBA. Gary Bettman explains the NHL’s side of the labour dispute. Donald Fehr warns of damage if there’s a lockout. NHL players tweet about NY meetings.

Note II:  Tune into the Illegal Curve Hockey Show, which brings you 3 hours of hockey talk starting at noon tomorrow on TSN Radio 1290.  Rich returns to the booth and joins Drew and Ezra to talk all things CBA as Saturday represents the biggest deadline in the history of the re-born Winnipeg Jets 2.0.  Guests include:  Ed Tait (Columnist, Winnipeg Free Press), Jack Edwards (Play by Play man on NESN, Boston Bruins).

Winnipeg Free Press:  Jets bemoan pending lockout.  Ed Tait, a guest on the show tomorrow, spoke to some of the Jets today at the IcePlex to get some more comments but at this point, the lockout is all but inevitable.

Winnipeg Sun:  Net loss of lockout huge for downtown biz.  Losing 15,000+ people coming downtown a couple nights a week is going to have a pretty big impact, pretty quickly for a number of downtown businesses.

Winnipeg Free Press:  Optimism fading among Jets players.  With good reason.  We are in the 11th hour and there is almost a 0% chance either side budges by tomorrow night.  Many Jets players, who only recently arrived in Winnipeg, are going to have to make decisions as to what they want to do.

Winnipeg Free Press:  Ladd believes fans can see through rhetoric.  Cutting through the rhetoric goes both ways and fans know that the only “side” getting screwed are the fans.  Do players really think a fan is going to feel bad if a salary is rolled back from 4.5 million to somewhere in the 3.4 million dollar range?  I don’t think that either side is going to see much sympathy.

Winnipeg Free Press:  All spin, no bargaining. Neither side is going to come away from this smelling rosy.  Jets season ticket holders will be in for a reality check next week when they find out what is happening with the 1000s of dollars they spent this summer on tickets.

Winnipeg Free Press:  Fans’ hopes for a quick solution dimming.  Good news for fans in Winnipeg is the weather is nice this weekend and you can feel free to wish yours truly a happy birthday tomorrow (hint, hint) but aside from that, there is zero reason fans should be enthusiastic about the prospect of NHL hockey resuming in Winnipeg anytime soon.

Winnipeg Free Press:  Burmistrov may play elsewhere in event of NHL lockout.  The Jets ability to make that decision for the player is about to run out so the decision is ultimately Burmistrov’s.  The good news is he is showing a willingness to discuss his best course of development with the team brass. 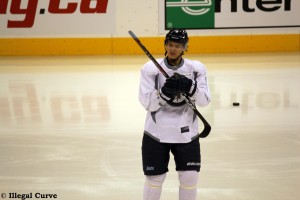 Northern Colorado 5:  Eagles land huge signing.  One of the biggest point producers in the ECHL over the past few season, a nice pickup by the Jets affiliate.

Illegal Curve:  Why hasn’t Evander Kane signed yet?  Ezzy asks the questions that everyone who follows the Jets has been wondering all summer long.  With the lockout expected tomorrow, it does not appear that a deal will get done.  Is this a condemnation of the city by the Kane camp?  Is it posturing by an experienced agent who is simply trying to get the most for his client?  If the answer isn’t given before 11:59 pm on the 15th, then folks in Winnipeg might be waiting quite some time for the answer.

ESPN:  Crosby embraces leadership role in NHLPA.  Crosby has seemed to avoid getting involved too heavily in the rhetoric.  Perhaps it is his personality or out of respect for his relationship with Pens owner Mario Lemieux.

CBC:  Who do you believe, Bettman or Fehr?  It appears their is one clear winner in this vote, except I think CBC made an error in setting up this poll.  They left out the most important selection;  the option that says “neither”.

TSN:  Owners unanimously agree to lockout without new CBA.  For those who were hoping that this lockout might signal the end of Bettman’s reign, I suggest you look up the word unanimous, as those 29 owners seem to like the job he continues to do for them.

National Post:  Gary Bettman explains the NHL‘s side of the labour dispute. Like it or not the owners have a position and it is the responsibility of commissioner Bettman to present their side in this dispute.  It appears to many fans that the owners are being greedy and are asking the players to help save themselves from…themselves.

USA Today:  Donald Fehr warns of damage if there’s a lockout.  Similar to the above, Donald Fehr is expected to attempt to do the best he can for his union.  But when players talk about money and current contracts, it really makes you wonder how removed they are from reality.

CBC:  NHL players tweet about NY meetings.  While the players tweets are expected, would be interesting to hear what NHL owners on twitter would have to say in response.  Of course, I believe just the Capitals Ted Leonsis  uses twitter but he hasn’t made any incendiary comments.

TSN:  Free agent Doan expected to announce decision today.  Looks like we will finally get an answer to the 2nd biggest saga to hit the NHL this summer.  Since the deal with Greg Jamison to buy Phoenix is not done (what a surprise) perhaps he is gonna head to the West Coast.

The Tennessean:  Predators re-sign Jonathon Blum.  The Preds were able to sign the last of their RFA’s with the signing of Blum.

TSN:  Blue Jackets assign Murray, Jenner back to junior teams.  While the league is sorting out the above mess the Jackets made the right decision to let their young prospects head back down to the Junior ranks to continue their development.

Illegal Procedure: Winnipeg Blue Bombers Papers. If you are a fan of CFL football, check out our other site, which gives you all the latest Bombers news. The playoff talk continues as the team gears up for its next stop in Calgary for a battle with the Stamps.

Illegal Procedure:  Power Rankings for Week 11.  Well the Bombers have a long way to go but at least they cannot fall any farther in the rankings.