Note:  The Jets were without Adam Lowry at practice on Friday and you can expect an update on him today. Stay tuned for the pre-game report which goes live around 9:30 AM when morning skate gets underway for updates as well as for the media availability with players and coach Paul Maurice. Join us afterwards for our post-game show here (be sure to smash that like/subscribe button).

Note II:  The Moose are rolling right now having won four straight games including the first of five against the Heat on Thursday night. Manitoba got Eric Comrie back on Friday which means he can set the all-time franchise win record if he can pick up a win today. The re-match goes this afternoon at 1 PM.

Note III: Be sure to join us on the Illegal Curve Hockey Show today as we will be chatting all about the Winnipeg Jets and Manitoba Moose this morning starting at 9:00 a.m. CDT. Today’s guests include Ted Wyman (Winnipeg Sun), David Alter (The Hockey News) and Mike McKenna (Golden Knights Studio Analyst). You’ll be able to watch via YouTube live here.  If you cannot watch live you will still be able to get the show via Podcast.

Winnipeg Sun: Maple Leafs toe line between nasty and dirty, and Jets have scars to prove it.  This ain’t the Leafs from a few years back as they’ve got more bite (not literally) to their game then previous incarnations. Given that playoff hockey can get more physical they are banking on this being the missing element from the last few seasons. 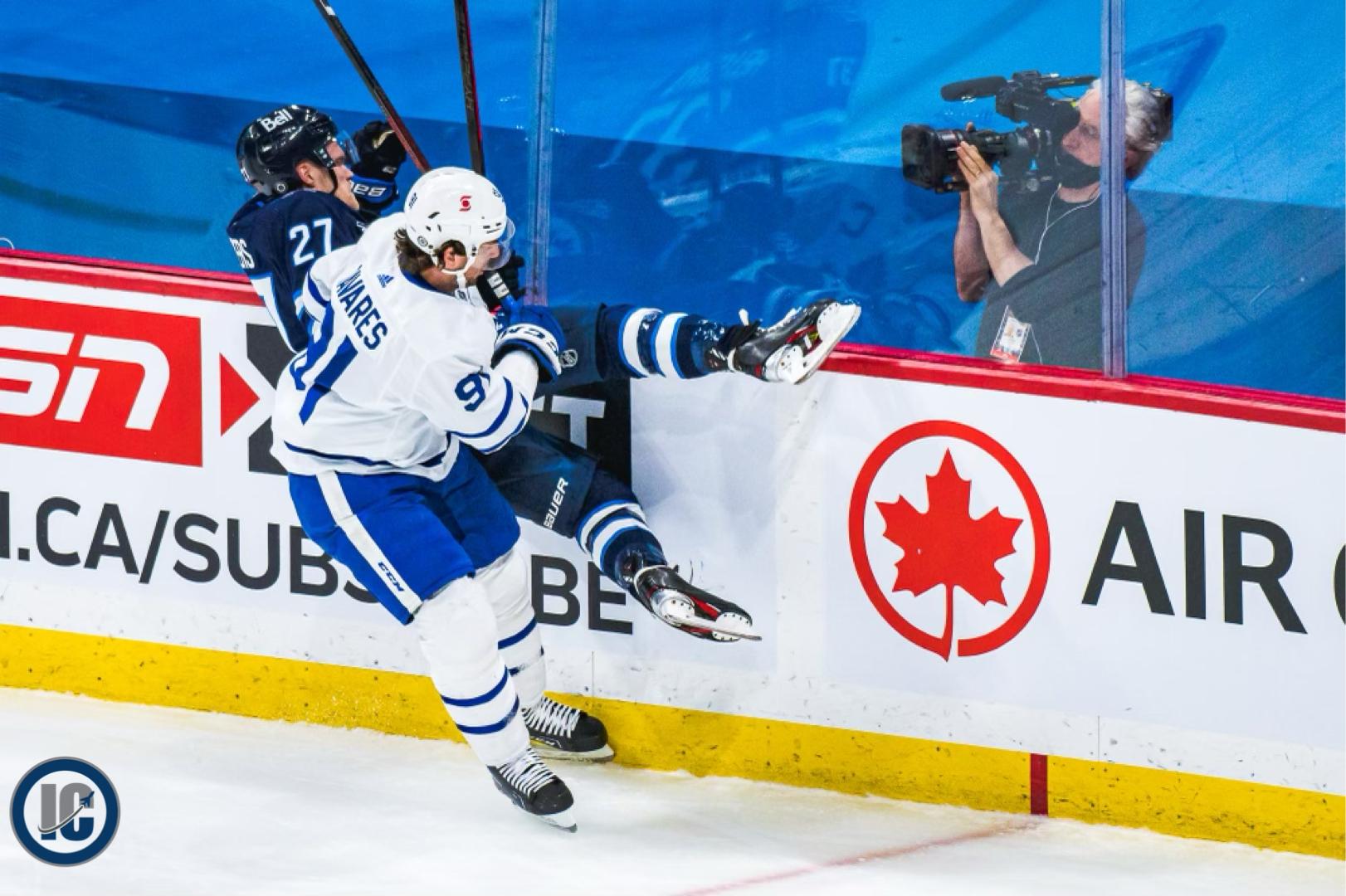 Winnipeg Sun: Jets Snapshots. Includes: 1) ‘I don’t think I should have been pulled’: Hellebuyck… Dubois says no horsing around, Jets need to crank it up… Lowry.

Winnipeg Free Press: Rulebook ignored as player after player injured by headshots and dirty plays. (Paywall).  Mike sounds off on head shots and the lack of enforcement by the league.

Winnipeg Free Press: Confident keeper not letting bad outing get him down as Jets prepare for Leafs rematch. (Paywall). If there is one thing folks shouldn’t be surprised by is the confidence of Connor Hellebuyck.

TSN: Leafs vow to get even more physical as Jets rivalry heats up. Lots of insight from the perspective of someone who covers Toronto from Mark.

Sportsnet: Joe Thornton fined for interfering on Jets’ Perreault. Good thing Thornton has a propensity for not wearing shirts cause he just lost his with that fine from Player Safety (insert sarcasm emojii).

TSN: Orlesky shares how Jets fans view the rivalry with the Leafs. Guest host Mark Roe, Jamie McLennan and Jeff O’Neill are joined by TSN Jets reporter Sara Orlesky to get her take on Jets head coach Paul Maurice’s sarcastic comments about the Maple Leafs’ fines and if there’s finally a real rivalry brewing between the North Division front runners.

TSN: Bad blood brewing between Maple Leafs, Jets atop North Division. The Maple Leafs have been described in many ways over the last few years but overly physical is not one of them. The team made adding grit and toughness a priority over the offseason but have they turned into a dirty team? Mark Masters reports.

TSN: Are the Maple Leafs a dirty team? With Paul Maurice’s comments about how the Leafs are now “poorer” due to fines levied against Joe Thornton for his hit on Mathieu Perreault, That’s Hockey debates whether or not the Leafs are a dirty team and weigh in on Connor Hellebuyck’s reaction to being pulled against Toronto.

TSN 1050 Toronto: Overdrive.  TSN Winnipeg Bureau Reporter Sara Orlesky joined the OverDrive crew earlier today coming off the Leafs victory over the Jets last night. She touched on the O-Dog’s 40 performance, the budding rivalry between the Leafs and Jets & on her hopes for a 2021 CFL Season.

Illegal Curve: 2019 5th rounder Logan Neaton transferring to Miami (Ohio).  We learned on Friday that the Winnipeg goalie prospect became the second of three prospects to find a new home in the NCAA for next season.