A look at the game 47 projected lineups and pre-game interviews.

The Jets come into tonight’s action having lost the first pair of games on this homestand in regulation and will want to avoid their first three game losing streak of the season in the re-match with the Leafs. Lots has been made of the physical nature of the last game and it will be interesting to see if that elements factors in this evening. 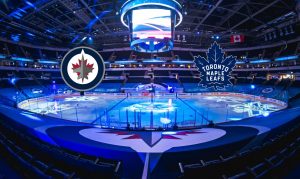 As per Ken Wiebe of Sportsnet it is an optional skate.  Ken said Jordie Benn stayed on for extra work.

Defenceman Ville Heinola heads to the Moose to get some game action in this afternoon as the team announced he had been reassigned.

1. Status of Adam Lowry
2. Benefits of running a three man rotation.
3. Clarity on Adam Lowry.
4. Thoughts on modifying the lineup without Lowry.
5. Why he felt it was a good game to get Logan Stanley back into the lineup.
6. How much does he value size/toughness on his backend?
7. Value of size.
8. Can guys take on the role of an agitator on this team?
9. Status of Ville Heinola?
10. Importance of Eric Comrie playing game with the Moose.

Jets head coach Paul Maurice confirmed that Adam Lowry doesn’t have a concussion diagnosis.  Said he has gone through his test, won’t play tonight and is listed as day-to-day.  He clarified that Lowry passed his tests but they are being cautionary.