Note:  The Jets picked up a big 3-2 regulation win last night in their re-match with the Flames which gives them three points of four in the first couple of games in this four-game series. For now the team is scheduled to hold a media availability at noon followed by a likely optional practice at 12:30 PM CT as they get set for tomorrow’s final game of this seven-game homestand and the third of four straight against Calgary. Be sure to check back for the practice report.

Note II:  The Moose got a roster boost with two players joining yesterday’s skate which included veteran Marko Dano. Today represents another day of training camp for the Manitoba out at the IcePlex this afternoon as they continue to work towards a regular season which still has not been announced by the AHL.

The Athletic Winnipeg:  Pierre-Luc Dubois film study: What we learned watching every shift from 15 games of the newest Jet. (Paywall).  Murat put some time and energy into this article all about the newest Jets forward.  Well worth reading to gain some insight into the type of player the Jets acquired.

Winnipeg Sun:  Jets survive late push from Flames, hold on for hard-fought win.  When the Jets needed big saves they got them from netminder Laurent Brossoit who was solid when the Flames began to pepper him with shots in the final frame. 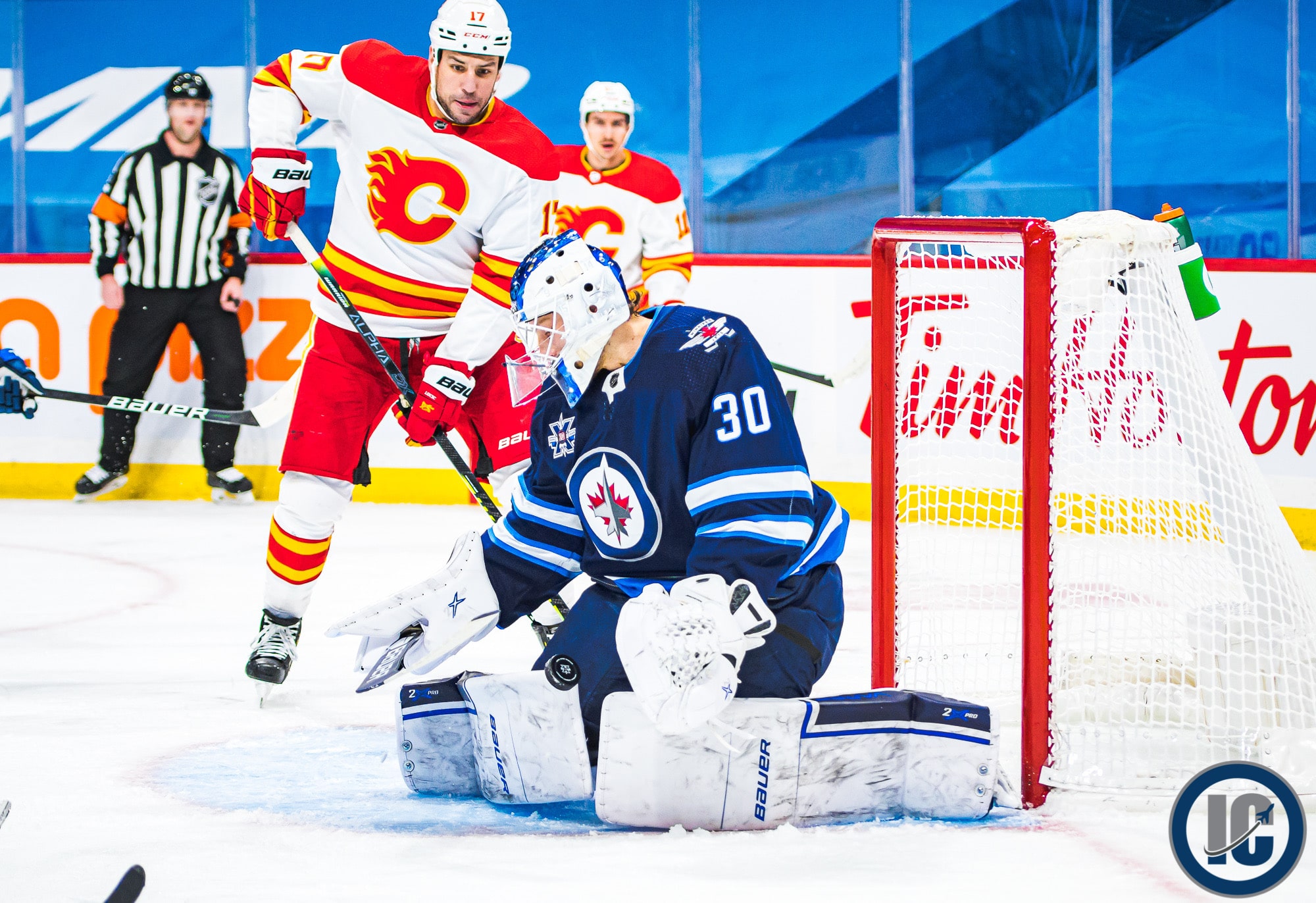 Winnipeg Sun: Jets need more from Hellebuyck and have faith that they’ll get it.  Given the number of times the top netminder has bailed out his squad he could probably expect some reciprocity (in spades) from the players in front of him.

Calgary Sun: No comeback this time as Flames fall to Jets after another slow start. Always good to get insight on the game from someone who covers the Jets opponent.

Winnipeg Free Press: Brossoit has his buddy’s back. (Paywall). He couldn’t have been much clearer post-game when asked if that game was also about Connor Hellebuyck and his short answer was “100%”.

Winnipeg Free Press:  Jets get depth scoring, timely saves in slim 3-2 win over Flames. (Paywall). Important to pick up clean wins this season and it was a big test for Winnipeg to be able to hold on for the regulation win.

Winnipeg Free Press:  Hellebuyck’s show of emotion a ‘rare occurrence’. (Paywall). Not often you see the Jets top netminder obliterate his stick like he did at the end of last night’s contest.

TSN: Button on Ehlers: ‘He’s just developing into a real go-to player’. With six goals in his last eight games, Craig Button discusses Nikolaj Ehlers’ red-hot start to the season, and the Flames’ continuous issues trying to play from behind,

The Chirp Podcast:  Jets centre Pierre-Luc Dubois & his dogs.  Daren Millard is joined by Pierre-Luc Dubois and his two bulldogs (5:17). Dubois talks about the circumstances surrounding his trade to Winnipeg, navigating the move to a new city, his quarantine schedule, and learning the ins and outs of a new system. He also discusses what it means to move to Winnipeg where his parents currently live and why he’s looking forward to joining the Jets.

TSN 120 Winnipeg: Jets have to limit high dangers chances allowed. Murat Ates of The Athletic joined Andrew “Hustler” Paterson and Rick Ralph on the Afternoon Ride. They looked back on the Jets loss to Calgary last night, discussed the number of high danger chances the Jets have given up, OT/shootout strategy, Connor Hellebuyck’s play so far and Blake Wheeler’s impact this season.

Winnipeg Free Press:  Dano joins Moose fold. (Paywall).  Mike takes a look at what is doing with the Jets AHL affiliate who are in their second week of training camp.