Note:  The Jets kicked off the 2020-21 season with a comeback win over the Flames last night as they took it 4-3 in overtime courtesy of Patrik Laine.

Note II:  The Jets have the day off today. They are scheduled to be back on the ice on Saturday at 11 AM for practice as they prepare for their three game road trip out east.

Note III:  While the team may not be skating it doesn’t mean everyone is off.  Today they made a waiver claim getting goalie Anton Forsberg off waivers as a replacement for Eric Comrie.

The Athletic Winnipeg:  Patrik Laine’s ascendance and five less obvious takeaways from Jets’ win. (Paywall). Murat reflected on the first contest of the season and came up with a Laine thought and five takeaways including: 1) Patrik Laine is going to have a career year. 2) Winger defence is very “in” in 2021. 3) Five forwards makes for all kinds of power play fun. 4) The Jets look to be trapping at the red line this year. 5) Nikolaj Ehlers did the right thing. 6) Bryan Little is still part of your team.

Sportsnet: Amid rumours, locked-in Laine does it all for Jets in opener vs. Flames.  He was a force to be reckoned with in last night’s game.

Winnipeg Sun: Laine silences rumours, naysayers with masterclass performance. While it was the smallest of sample sizes to judge a season by he was a monster in last night’s win. 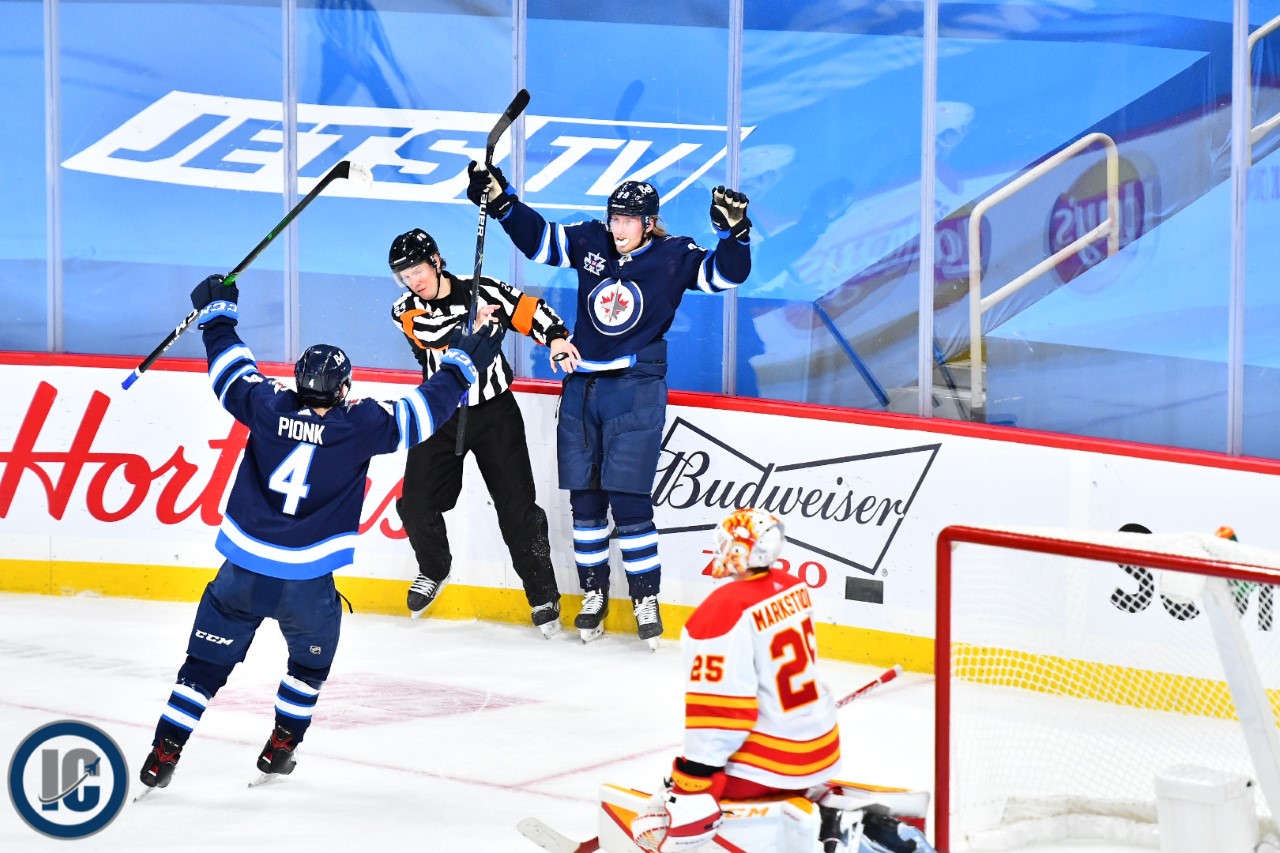 Winnipeg Sun: Laine scores two goals, including winner in overtime, as Jets storm back to beat Flames.  Ted provides you with his insight into the game.

Winnipeg Sun: Jets survive first COVID scare, and Flames.  The taxi squad is gonna be a very useful element given how much can change so quickly in our present environment.

Calgary Sun:  Markstrom snags point for Flames despite season-opening loss.  The glove save on Mark Scheifele in the 3rd period was a save we will likely be seeing for some time on the highlight reels. No doubt his play between the pipes earned his squad a point.  Read about the game from the perspective of a writer who covers the Jets opposition.

Winnipeg Free Press:  Jets win… but have that empty feeling. (Paywall).  As one of the few people inside Bell MTS Place last night I can attest to what an unusual feeling it was to watch the game without the emotional element that the fan base brings.

Winnipeg Free Press: Laine leads Jets to 4-3 OT win over Flames. (Paywall).  Jeff recaps the game from his spot inside the arena.

The Athletic Winnipeg:  Five bold (or not so bold) predictions for the Winnipeg Jets in 2021. (Paywall).  Murat hits you with his five predictions including: 1) Jack Roslovic will be moved well before the trade deadline. 2) Mark Scheifele will finish Top-10 in  Canadian division scoring. 3) Patrik Laine will outscore Blake Wheeler for the first time in his career. 4) Paul Stastny will re-sign in Winnipeg. 5) Patrik Laine will be traded this summer.

TSN:  Laine shines in comeback win for Jets. Amidst all of the off-ice turmoil, Jets star Patrik Laine gave it all on the ice, scoring twice including the overtime winner. Sara Orlesky, Dave Poulin and Darren Dreger have more on his game and Elias Lindholm two point performance.

Illegal Curve: Jets prospect defenceman Leon Gawanke returning to Canada after playing in the DEL. He got a chance to put on the jersey of his hometown team but he’ll be returning to Manitoba for the AHL season.