Affiliate news – St. John’s IceCaps: Putting home-ice advantage to the test. Penguins headed back to St. John’s with new life. They couldn’t change the past, but influenced the present.

Non-playoff NHL news: Larry Robinson would be open to returning to Montreal.

Winnipeg Free Press:  Hydro bought tickets to ‘support campaign’.  Now everyone is fully disclosing lest they be discovered covering this up.  The logic that they did this to “help get the Drive to 13,000 over the hump” is laughable.  What are your thoughts on public institutions purchasing Jets tickets?

Winnipeg Free Press:  City crackdown on Jets freebies.  So much drama associated with these ticket scandals.  Is this worth the effort?  Well maybe these ones would be… 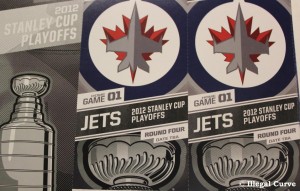 The Economist:  Southern Discomfort.  Mostly talks about the lack of Stanley Cup success in Canada of late.  Also discusses the success the Thrashers have found in Manitoba.

The Telegram:  Putting home-ice advantage to the test.  St. John’s have been excellent at Mile One of late and with whiteout conditions expected again for Game 6, you can bet these Caps will be flying.

Scranton Times-Tribune:  Penguins headed back to St. John’s with new life.  Can these Baby Pens become the 18th team in AHL history to shake off a 3-1 deficit?

Wilkes Barre Times-Leader:  They couldn’t change the past, but influenced the present.  Not dwelling on the two previous OT losses was a good move by the Baby Penguins.  They won an important Double OT victory on Tuesday night and have forced Game 5 in St. John’s on Friday at 7:30 pm NDT (5 pm cst).

Washington Post:  Ovechkin scores as Capitals force Game 7 against Rangers.  When they needed #8 to step up and be the man he sure did.  Along with rookie goalie phenom Braden Holtby, who is helping these 7th seed Capitals win despite having no previous NHL playoff experience.

New York Daily News:  Capitals pop Rangers 2-1, force Game 7.  Looks like all the other teams are gonna get a little more rest as the Conference Finals are going to have to wait until after Game 7 between New York and Washington on Saturday night at MSG.

TSN:  Larry Robinson would be open to returning to Montreal.  Interesting possibility of seeing the former Habs star defenceman behind the bench.