Note:  Sad news in the hockey world as Eric Hawerchuk, the son of Jets legend Dale Hawerchuk, announced that his father had passed away on Tuesday.  There was plenty of reaction from the hockey community and fans on the passing of the Hall of Famer and icon in Winnipeg. 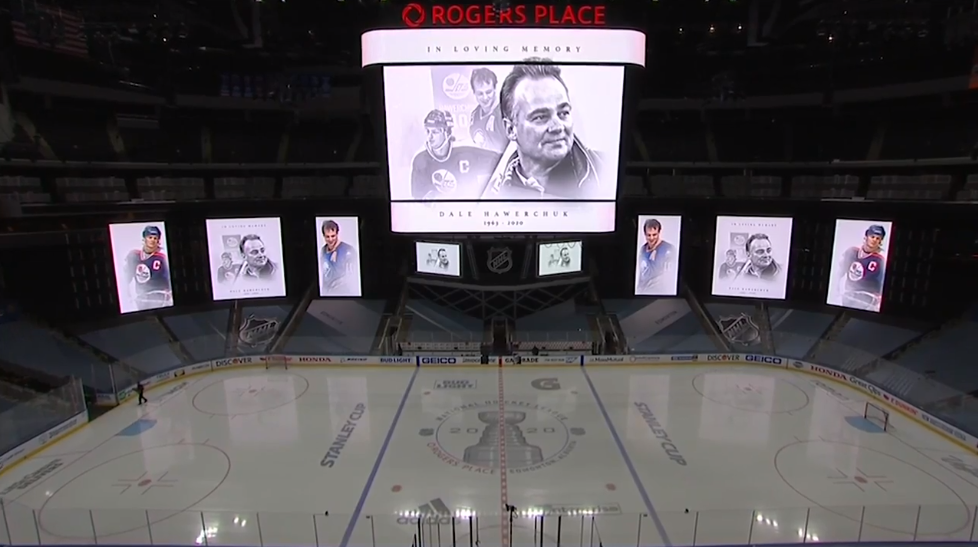 CBC:  Memorial grows in Winnipeg for beloved former Jets star Dale Hawerchuk.  There won’t be a shortage of folks born in the 70s and 80s who hold fond memories growing up watching number 10.

Winnipeg Sun:  Jets legend Hawerchuk gone at 57.  It is nice to read that the Jets were able to tell Hawerchuk they were planning on erecting a statue in his honour before he passed.

Winnipeg Free Press: Tributes pour in for humble Jet who grew into superstar. (Paywall).  Jason and Mike tackled the task of remember a Jets legend.

Winnipeg Free Press: Dale Hawerchuk 1963-2020. (Paywall).  The Freep photographers have been taking his photo since the early 80s and there are some fantastic pictures in this collage.

TSN:  Humble Hawerchuk remembered as a resilient competitor.  If not for those pesky Oilers and Flames there is almost no question the Smythe Division Jets, in large part to Hawerchuk, would have contended for multiple Cups.

Sportsnet:  Dale Hawerchuk was ‘one of us’ and will always be beloved by Winnipeg.  He made his home in Manitoba and really became part of the community during his time here.

Sportsnet:  Dale Hawerchuk’s most notable stats, awards, accomplishments.  He busted into the league and left an indelible mark on many record books.

Sportsnet:  Dale Hawerchuk’s quiet brilliance made Winnipeg, and Canada, a winner.  While folks are affectionate over Teemu and the Jets of the 2.0 era none have quite the grip on this city as Hawerchuk.

The Athletic:  Dale Hawerchuk remembered for his place among hockey’s greats. (Paywall).  What he did between 1981-82 and the 1989-90 season in Winnipeg was simply unbelievable.

CBC: Former teammates remember Dale Hawerchuk as superstar player, and class act off the ice.  You’d be hard pressed to have grown up in the 1980s in this city and not have some sort of Hawerchuk memory.

TSN:  Remembering Hawerchuk’s legendary career. Hockey Hall of Famer Dale Hawerchuk has died at the age of 57. A native of Toronto, Hawerchuk had experienced a recurrence of cancer in recent weeks. A five-time All-Star, Hawerchuk appeared in 1,188 games over 16 seasons with the Jets, Sabres, Blues and Flyers. Michael Farber has more on his legendary career in this essay.

Sportsnet: Scott Oake: ‘Dale was and forever shall be hockey royalty in Winnipeg’. As the hockey world continues to mourn the passing of the great Dale Hawerchuk, Ron MacLean is joined by Scott Oake to further discuss the impactful legacy of one of the best players of his generation.

JetsTV:  Winnipeg Jets Executive Chairman, Mark Chipman on the passing of Jets legend and Hockey Hall of Famer, Dale Hawerchuk.  He fielded questions yesterday about what number 10 meant to folks in this city.

Let’s Go Hockey Podcast: C.J. Suess.  Tune in this week to hear current Winnipeg Jet forward, CJ Suess, talk about his journey through the game of hockey.   CJ grew up in Minnesota, spent is college career as a Mankato Maverick (Let’s Go!), and was drafted to the Winnipeg Jets in 2014.