Note:  The Jets concluded their three-games homestand last night with a big comeback win against the Coyotes as they scored four unanswered to win it 4-2.  Today they are scheduled to practice at 12 noon at Bell MTS Place before they take off for Edmonton to kick off three games on the road. Be sure to check back for the Practice Report for the latest news and audio.

Note II:  The Moose were off on Monday after they concluded a four-game homestand which saw them go 3-1-0-0.  They’ve still got an uphill climb to a playoff spot as they sit seven back of the fourth and final spot in the Central.  They are scheduled to practice today out at the IcePlex.  They will practice again on Wednesday before they head out for six games on the road.

The Athletic Winnipeg:  Jets enjoying trickle-down effect: Adam Lowry provides physical spark in return.  (Paywall).  Ken wrote about the return of number 17 and what impact he had on the lineup.

Winnipeg Sun: Jets battle back to beat Coyotes.  It was “the most important game of the year” of course I’m using past tense since they will have already switched their focus to the Oilers who they play next.  But be sure to check out Paul’s recap. 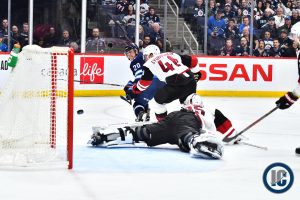 Winnipeg Free Press: Kersplat! Lowry’s back. (Paywall).  I was expecting him to try and get physically engaged early after being out of the lineup since January 19th but certainly didn’t expect him to drop the gloves the way he did.

Winnipeg Free Press: Sports world not immune to coronavirus concerns, uncertainty. (Paywall). This story was written with a Jets context but in light of what is happening in San Jose it is clear that this could be impacting the NHL across the board for some time.

The Athletic Winnipeg: Why do Dylan DeMelo and Josh Morrissey work so well together? (Paywall).  Murat looks at some video as well as spending time dissecting with this duo just makes sense on the top pairing for Winnipeg.

TSN: Can Jets continue winning ways on the road? The Jets climbed out of a 2-0 hole to earn their sixth straight win at home, but now have eight of 12 games coming up on the road. How difficult will this be for Winnipeg to clinch a playoff spot? Mike Johnson has more.

TSN:  Do the Jets have what it takes to make playoffs?  (This was shot before last night’s game).  The Jets’ playoff hopes will likely come down to the very end of the season. Does the makeup of their team suggest they have the pieces to make the postseason? That’s Hockey debates.

Reaction from the Room: Jets 4 Coyotes 2
Winnipeg Jets have assigned Mark Letestu to the Manitoba Moose on a conditioning assignment