Note:  The Jets took Saturday off following their 4-0 win over Vegas on Friday as they continue to have multiple days between games which allows them to rest/recover following a game and still get in a practice before their next contest.  Today they are scheduled to practice at the IcePlex at 11 AM.  Be sure to check back for the Practice Report.

Note II:  The Moose took on the Wild last night, a team they trailed in the standings by 26 points heading into action and they pulled off their third straight victory although this one took a shootout.  It was the fourth straight time they’ve needed either overtime or a shootout and they have gone 3-0-1-0.  It means they sit six points back of the fourth and final playoff spot in the Central division and they will have a chance to close out this four-game homestand with the clean sweep if they can win this afternoon in a re-match with the Wild.  Puck drop is at 2 PM.

Winnipeg Sun: What big win means for the Jets, and what it doesn’t.  Each game is bigger than the one that came before it and there is no doubt that the Jets captain keeps things very even win or lose. 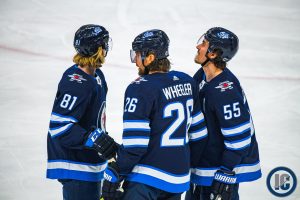 The Athletic Winnipeg:  What Blake Wheeler is really saying about Winnipeg’s win over Las Vegas.  (Paywall).  It really is going to be a wild final month of the NHL regular season.

Topics: Jets/Golden Knights recap, The imminent return of Adam Lowry and the impact of Mathieu Perreault on the Jets fourth line, Jets/Coyotes Preview, Should the Jets re-sign Dylan DeMelo as soon as possible.