Note:  The Jets needed a big game from their squad and two points last night when they welcomed the 9-1-0 Golden Knights to town and that’s exactly what happened when the final buzzer sounded at Bell MTS Place and the scoredboard reflected their 4-0 win over Vegas.  The Jets were scheduled to practice at 12 noon have canceled in favour of giving the team some rest and will instead practice next on Sunday at 11 AM out at the IcePlex as they get ready for the Coyotes on Monday.

Note II:  With quite a bit of practice in the rear-view mirror the Moose will finally get back into a game when they play host to the Iowa Wild tonight to kick off a pair of games here in Winnipeg that will wrap up this four-game homestand.  Manitoba sits 26 points back of Iowa in the Central Division standings and seven points back of a playoff spot.  These games are must win territory for the Jets farm club if they have any hope for playing in the playoffs.

Note III: Tune in for the Illegal Curve Hockey Show on TSN 1290 Winnipeg at 9 AM CST.  Three hours of Winnipeg Jets and NHL talk which you can listen to here.

Winnipeg Sun:  Jets make statement in big win over Golden Knights.  You don’t want to call it a must win game but it was basically a must win contest.  The goal Nikolaj Ehlers scored 32 seconds into the game was a massive boost for a team that has struggled in the opening period of games.  Connor Hellebuyck was excellent in net and Kyle Connor’s goal scoring streak continues. 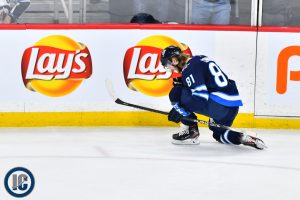 Winnipeg Free Press:  Jets dominate in 4-0 win over Golden Knights.  (Paywall).  I don’t know if it was the three goals in the opening 20 minutes or so but that Bell MTS Place crowd felt almost playoff level intensity during most of the contest.

Winnipeg Free Press:  Wheeler stepping it up down stretch.  (Paywall).  A look at what the Jets captain has done during this important stretch for Winnipeg.

Las Vegas Review Journal: Golden Knights open road trip with loss at Winnipeg.  Get a read on last night’s game from the perspective of a writer who covers the Jets opposition.

The Hockey News: What should the Jets do about their D-corps for 2020-21? Readers have questions and Matt Larkin has an answer.

TSN: Button believes Jets will secure a spot in the playoffs.  Patrik Laine picked up his 27th of the season in the Jets’ crucial win over the Golden Knights but according to TSN’s Craig Button, it’s the other areas of Laine’s game that have stood out this season. The two points were huge for the Jets as they continue to battle for a playoff spot.