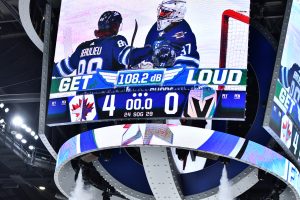 Kyle Connor scored again which means he is up to 36 goals on the season. He is currently riding a five game goal streak and has six goals total during it.

Neal Pionk’s 22nd power play assist of the season which would tie him with Tobias Enstrom for the most ever in a season for the franchise.

Connor Hellebuyck with his league leading sixth shutout of the season.

Coach Maurice:  Fair to call that a statement game?  Is the start a by-product of the rest?  When the game goes to 3-0 on the difficulty in staying focused and how did his team do?  What did he see from Mathieu Perreault in his return?  What does he see from the DeMelo and Morrissey pairing?  Does the trust from the 1st pairing change the way the forwards play?  The player without the puck.  The play of the Eakin line.  What makes the team good at counter-punching?  Making teams pay when they make mistakes against Winnipeg.

The Jets are scheduled to practice on Saturday as they get set to conclude this homestand against the Coyotes on Monday.  You can kick start your day with the AM Jets papers which go live at 7 AM CST on illegalcurve.com. followed by the Illegal Curve Hockey Show on TSN 1290 Winnipeg at 9 AM CST.