After a day off the Jets are back on the ice today to practice for their game against Arizona. 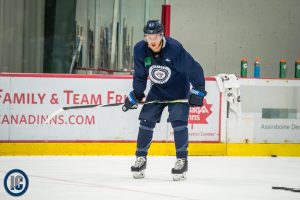 The Jets used Saturday to rest and recover following their 4-0 win over the Golden Knights on Friday which is likely to be their norm with two days between games a number of times this month.

Biggest question will be the status of Adam Lowry and whether he is ready to return to the lineup since being knocked out of it back on January 19th.

As per Ken Wiebe of The Athletic Winnipeg no Mark Scheifele or Anthony Bitetto and he says that “Andrew Copp is filling in for Scheifele, Adam Lowry looks like he will slide into Copp’s spot. Extra line looks like Bourque-Letestu-Shaw”.

Jack Roslovic on the confidence the team is feeling at home down the stretch, having time between games for rest/recovery, importance of getting healthy guys back in the room, whether he is a standings watcher and facing the Coyotes.

Josh Morrissey on getting healthy players back into the lineup, what Mathieu Perreault brings both on and off the ice and the Jets play at home.

Coach Maurice:  Any concern with Mark Scheifele?  The recent positive stretch at home.  Challenges of integrating Adam Lowry back into the lineup.  Trying to figure out the lines.  Does he expect Lowry back tomorrow?  Thoughts on the Coronavirus.  Is he worried about traveling?  Pairing of Dylan DeMelo and Josh Morrissey.  DeMelo’s ability to “get out of trouble”.  The value of Mark Letestu/Bryan Little being around the team.

Jets bench boss says he has no concerns with Mark Scheifele (who didn’t skate today) and said he should be a player tomorrow.  He also indicated there is a very strong possibility that Adam Lowry returns to the lineup tomorrow depending on how he comes to the rink on Monday.

The Jets will conclude their three-game homestand tomorrow night against the Coyotes at 7 PM CDT.  Be sure to keep it locked to illegalcurve.com for the AM Papers which go live at 7 AM CDT.