Note:  The Jets had some jump after a day off on Wednesday when they took to the ice for a busy practice on Thursday.  It was an informative one as we learned that Mathieu Perreault is a possibility for tonight’s game against Vegas while Adam Lowry isn’t quite ready to return.  With morning skate at 10:30 AM CST be sure to stay tuned for the pre-game report to learn of any changes and for the latest audio ahead of puck drop which goes at 7 PM CST.

Note II:  The Moose will wrap up a week of practice today at the IcePlex ahead of their weekend series against the Wild this weekend in Winnipeg to conclude their four-game homestand.

The Athletic Winnipeg:  Quantifying how Winnipeg’s many injuries have affected them in the standings. (Paywall).  The list of skating wounded this season for Winnipeg has been a long one and Murat attempts to best calculate just how much it has hurt the team this season.

Winnipeg Sun:  Jets Gameday.  Scott’s big story is “can they hang”.  His five keys to the game include: 1) The Kyle Connor Show. 2) Top-line dynamite. 3) Hellebuyck heroics. 4) Perreault returns? 5) A chip on the shoulder.

Winnipeg Sun:  Brossoit dealing with the nature of the business as starts dry up.  Cannot be easy for an elite athlete knowing the likelihood is you are getting one maybe two more starts for the rest of the season. 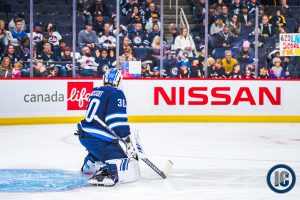 Winnipeg Sun:  Jets Notebook.  Scott’s notepad includes: 1) Lowry edging closer to return after shedding non-contact jersey and 2) Maurice on the proposed change to the offside rule and which rule he’d actually like to see modified.

Winnipeg Free Press:  Jets excel at falling behind early in games.  (Paywall).  If you wanna be good at something may as well be awesome at it.  Clearly not an ideal situation for the local NHL squad and one they will need to clean up over the remaining 14 games if they want to not be playing golf in April.

TSN: What makes Kyle Connor such an elite scorer? Winnipeg Jets forward Kyle Connor has scored a career-high 35 goals this season in only 68 games, good for sixth in the NHL. This year marks his third in a row with 30 or more goals, and he only seems to keep getting better. TSN’s Mike Johnson analyzes what makes Connor such an elite scoring threat.

TSN: Jets’ Connor continuing to put the NHL on notice. With 35 goals so far and a third consecutive 30-goal season, Kyle Connor continues to put the NHL on notice. It’s sometimes easy to forget that it wasn’t always a smooth road for Connor with the Jets, but Paul Maurice points to a specific game against the Hurricanes in 2018 where, despite Connor not registering a point, he felt things seemed to click. Sara Orlesky has more.

The Athletic Winnipeg:  The Boarding Pass.  Murat and Ken provide an injury update on Mathieu Perreault and Adam Lowry, ahead of a playoff type game Friday night vs Vegas.  The Jets continue to rely on Scheifele, Connor and Wheeler to gobble up massive minutes, as Winnipeg continues to search for the right combination for a below average 4th line  Plus, the guys give their thoughts on how Dylan DeMelo has fit in with Josh Morrissey.  Finally, according to GM Kevin Cheveldayoff, the Jets strive to be a cap team, with the new projection for the cap which could be 84 million plus, and Dustin Byfuglien’s salary coming off the books, how will the Jets spend their money this summer?

Winnipeg Jets Injury Updates: Adam Lowry not quite ready to return while Mathieu Perreault is an option against Vegas
Game 69: Jets vs. Golden Knights projected lines