Winnipeg Jets Injury Updates: Adam Lowry not quite ready to return while Mathieu Perreault is an option against Vegas

Updates on the two forwards who are getting closer and closer to a return to the Jets lineup. 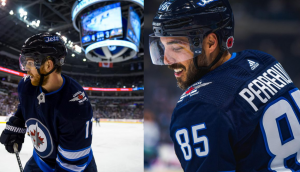 Today at practice both Adam Lowry and Mathieu Perreault were wearing light blue uniforms that indicated they were extra forwards but also wore regular contact jerseys.

“So both Perreault and Lowry will get looked at again this afternoon.  Kinda reassessed as to where they’re at.  I won’t have both of them going back in at the same time.  But it was a full on practice for them today which is a great sign.”

Lowry had said during his media availability that he wouldn’t be ready for tomorrow’s game against Vegas.  Coach Maurice was asked if Perreault is an option for the game “Yes.  He is an option.”

He added “We had Perreault slightly ahead of Lowry.  I think that’s continued.  They’re going to get checked out by the doc today and we’ll go from there.”