Note:  It was quite a busy Tuesday for the Jets.  We learned that the team had activated Nathan Beaulieu and placed Mathieu Perreault on injured reserved although that wouldn’t impact their game later that evening against the Predators which closed out their three-game homestand.  Ultimately their Central Division rival took it 2-1 in overtime which means the Jets finish the homestand with a record of 1-1-1.  The Jets are scheduled to practice today at Noon before they head to St. Louis for this one-game road trip.  Check back for the Practice Report.

Note II:  The Dustin Byfuglien news continued yesterday with insider Elliotte Friedman chiming in with his information about the situation.  To read his comments click here.

Note III:  The Moose will be on the ice for a third consecutive day for practice as they prepare for a massive homestand which will kick off with a pair of games against the Chicago Wolves.  While they will likely have JC Lipon in the lineup you can also likely expect them to lose a forward up to the Jets when they head out on the road to face the St. Louis Blues as they currently have no extra forwards.  Update:  The Jets announced they have recalled Andrei Chibisov and reassigned Cam Schiling.

Winnipeg Sun:  Wild-card implications as Jets falls to Predators in OT.  Scott recaps the action from his spot inside Bell MTS Place. 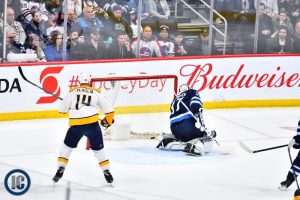 Winnipeg Sun:  The end of an era? Jets weigh in on Big Buff.  Paul caught up with some of the Jets players to get their Byfuglien memories.

Winnipeg Free Press:  Hellebuyck makes 34 saves in Jets 2-1 OT loss to Predators.  (Paywall).  The Jets netminder made one mistake which proved costly as it led to the Nasvhille goal which tied the game but otherwise he was very good once again.

Winnipeg Free Press:  Harkins glad his dad was at game.  While it was in a losing effort you can imagine how much pride he felt watching his son live for the first time (at the NHL level) playing the game he himself played 24 years earlier.

TSN:  They max out on effort, strategy.  TSN Director of Scouting Craig Button thinks that Paul Maurice has done an exemplary job of coaching the Jets, but they just don’t have enough.