Reaction from the Room: Predators 2 Jets 1 in OT

Post-game reactions from the Jets dressing room as well as from Coach Maurice. 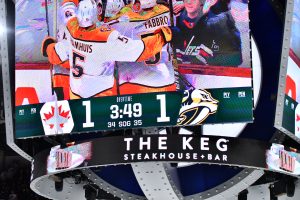 It was a solid back and forth effort between two Central Division rivals tonight but once overtime got underway the Nashville Predators took control of the game with the Jets never completing a line change or gaining possession which culminated in Mikael Granlund scoring the game winner just over a minute into the extra frame. The Jets overall record is now 26-23-5.

Coach Maurice:  Assessment of the game.  What has Appleton done well on the second line?  Does he see Appleton as a double-digit goal guy?  Edge in high-danger chances.  On the OT winner.  The transition defence against the Preds. More on the OT goal against.

Coach Hynes: Performance of Saros.  Reaction to winning three of four.  What was he thinking when Patrik Laine was taking that penalty shot?  What has he learned about his team after 11 games?  Was the second period an example of drifting away from their consistency?

The Jets have a practice scheduled for Wednesday at 12 noon.  You can kick start your Saturday with the AM Jets papers which go live at 7 am on illegalcurve.com.