Note:  The Jets returned to the ice on Thursday afternoon to practice as they got ready for their first game since the All-Star and Player breaks.  There were some health updates on the injured players who we learned won’t yet be a factor for the team in tonight’s game.  We also learned that Laurent Brossoit will get the start in net for Winnipeg.  The Jets will be back on the ice this morning for AM skate as they get ready for tonight’s game against the Bruins.  Check back for the pre-game report later this morning.  Puck drop is at 7 pm.

Note II:  The Moose practiced (minus Logan Shaw and Cam Schilling who were recalled) yesterday in Illinois as they will conclude a six-game road trip which began before their AHL All-Star break and which re-starts tonight in Rockford and will conclude on Saturday night in Chicago against the Wolves.  Puck drop against the IceHogs is at 7 pm.

Winnipeg Sun:  Maurice ‘all for’ trade boost, but Jets need to get harder, too.  Hard to foresee this team being major players over the next month when it comes to making a trade.

Winnipeg Sun:  No excuses for Jets against Bruins.  Andrew Copp is quickly becoming the best quote on this Jets team.  He is thoughtful and isn’t afraid to speak his mind. 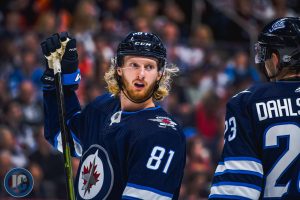 The Athletic Winnipeg: Jets trade tiers: Who’s tradable? Who’s untouchable? Who could realistically move ahead of the deadline? (Paywall).  Murat examines the pieces available throughtout the organization although after reading his assessment you aren’t left with the overwhelming feeling that there is much to be dealt.

The Athletic Winnipeg:  On Jets trade suggestions and other questions heading into pivotal stretch.  (Paywall).  Jets fans had questions and in this mailbag Postman Wieber gives you his answers.

Winnipeg Free Press:  Beaulieu absorbs tough breaks.  (Paywall).  He has played less than half of the games for the Jets this season in a season that they could have used him as a healthy option.

Winnipeg Free Press:  Sun-soaked Jets hoping to get around to winning ways.  (Paywall).  It is going to take some serious intestinal fortitude when you look at what is coming up and where the Jets are currently positioned and where they ultimately want to get to.

Winnipeg Free Press:  Morrissey ready to tee it up.  (Paywall).  He doesn’t sound like he is as hard core a golfer but it sounds like a fun event for both the player and fans.

The Athletic Winnipeg: Are the Jets willing to pay the price on Trade Deadline Day? With four difficult games on the horizon for the Jets, could the outcome of those contests determine what Kevin Cheveldayoff does, leading up to the NHL trade Deadline? Murat and Ken discuss the Jets game plan with the trade deadline, which is less than a month away. The Jets are in the market for a top four defender. Will Winnipeg pay the heavy price to get one though? Jack Roslovic’s name is prominent in trade discussion to acquire such a player.