A look at the game 52 projected lineups and pre-game audio. 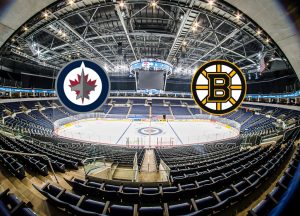 The Jets have dug themselves a hole as they slid into the break on a four-game losing streak.  Add to that a game to start the post-break portion of the schedule against the big, bad Bruins and followed by a game the next night against the Blues and it is a recipe for as tough a start as you could expect.

While Mark Scheifele didn’t skate on Thursday as he was traveling back to Winnipeg he is expected to be in the lineup tonight.  We also learned that Lauren Brossoit will start in net.  The Jets long list of skating wounded is not quite ready to get reduced.

As per Ken Wiebe of The Athletic Winnipeg confirms that the lines and D pairs remain the same as they were yesterday.

Via Marisa Ingemi of the Boston Herald.

Patrik Laine on the key to being ready to go after a layoff, looking ahead not backwards, the next few games, whether there is anything they can take from their last game vs Bruins, what he needs to do to help team win.

Josh Morrissey on the key to coming out the right way following a layoff, whether it was harder to get away from the thoughts of hockey considering how the pre-break schedule went and whether he is watching the standings and scoreboard?

Coach Maurice:  What does he like about Mason Appleton up on the second line?  On Patrik Laine’s development.  When Pionk was acquired was pairing him with Morrissey something he considered from the start?  What does he like about the pairing?  Mark Scheifele playing in his 500th NHL game and what is the next step in his development?  Lack of power play success.  Missing Byfuglien assisting with development of younger players.  More on Laine’s growth.

Jets centre and first ever draft pick back in 2011 Mark Scheifele will play in his 500th NHL game.