Note:  The Jets are on their All-Star and Player break.

Note II:  TSN hockey insider Darren Dreger joined the boys on the Afternoon Ride this week and delved into a number of Jets topics including the plan ahead of trade deadline, the Dustin Byfuglien situation, Paul Maurice’s status and more.  To listen click here.

Note III:  The Moose were bolstered yesterday with the addition of Kristian Vesalainen, Nelson Nogier and Cam Schilling who were reassigned by the Jets to their AHL squad.  I suspect that Jansen Harkins will be assigned as well but only so he can participate in the AHL All-Star festivities which are in Ontario, California this Sunday and Monday.  The Moose have two games left before their All-Star break, the first of which is tonight in Iowa, where they will take on a very good Wild squad.  Puck drop is at 7 pm.

Winnipeg Free Press:  Answer to Jets’ current woes is located in the slot.  (Paywall).  I always find Andrew’s articles an interesting read.  This time he looks at a big source of the problem for Winnipeg.

The Athletic Winnipeg:  Who is the best prankster, worst chirper and best binge-worthy show.  (Paywall).  Getting some insight into the Jets via this player poll.

Winnipeg Free Press:  Jets’ season facing difficult prognosis.  (Paywall).  Plenty of people are turning their focus to the Jets General Manager to see what his next move (or moves) might be.

Winnipeg Sun: Five things that must happen for Jets to make playoffs.  The folks over at Moneypuck had the Jets playoff odds down to under 20 percent so it is not looking so good.  Ted’s list includes: 1) In Helle they trust. 2) Stabilize the D. 3) Power on the front lines. 4) Coach it up. 5) Chevy in gear. 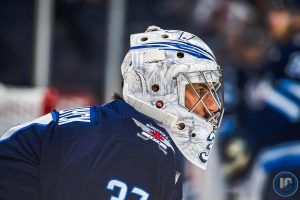 Winnipeg Sun:  Jets hope to use break to figure out what type of team they want to be down the stretch.  I suspect the number one priority would be healing because this team has quite a few players dealing with some things who can use the time to reset and recover.

Winnipeg Sun:  Hellebuyck voted NHL’s best goalie in mid-season awards.  Considering the amount of heavy lifting Hellebuyck has done this season for the Jets it is a wonder that he doesn’t have a bad back.

The Athletic Winnipeg: Moms trip a reminder that NHL results are impacted by much more than worthiness.  (Paywall).  Must have been tough for the moms to not get a chance to see their kids win a game during the three game road trip.

Sportsnet: Mark Scheifele would like to meet Gretzky at All-Star weekend. Mark Scheifele talks about being at the NHL All-Star game and who he wants to run into at the event.

TSN: The market has shifted on defencemen. Hockey Insider Darren Dreger joins the OverDrive guys to discuss how the price to acquire a defenceman has increased over the course of the season, whether the Jets can right the ship, and how to convince players to participate in NHL All-Star weekend.

TSN: Hellebuyck on break: ‘I’m going to turn my brain off and put my mind on hold’. Connor Hellebuyck says he’s going to turn his brain off and give his mind a break while he soaks up the All-Star festivities. His teammate Mark Scheifele also explains why his favourite part about this weekend is catching up with players like Patrick Kane.

TSN 1290 Winnipeg:  Afternoon Ride.  On Wednesday the guys spoke to Darren Dreger about the Jets.  You can hear his replies to their Jets questions, some of which are transcribed.