Note:  The Jets are on their All-Star and Player break.

Note II:  The Moose had a solid effort last night in Iowa but they fell just short 1-0 to the Wild. They had a fantastic opening period but a lack of power in their powerplays huts them and they couldn’t muster much in the 3rd as they got outshot 16-6 in the final frame and outscored 1-0.  They will have one final game to play tonight in Iowa before they start their AHL All-Star break.

Note III: While the Jets may be enjoying some R&R we aren’t taking any time off.  We’ve got three hours of Winnipeg Jets and NHL talk on the Illegal Curve Hockey Show on TSN 1290 Winnipeg starting at 9 am.  The last 45 minutes of today’s show (starting at 11:15 AM) will feature a call in portion.  So if you’ve got something you wanna discuss something Jets, Moose or NHL related give us a call (204-780-1290).

Winnipeg Sun:  Numbers show Hellebuyck deserving of mid-season Vezina nod — and maybe more.  I didn’t know there was even a backlash to this midseason vote.  Live and learn.  Scott looks at the facts when it comes to the Jets top netminder.

Winnipeg Free Press:  Answer to Jets’ current woes is located in the slot.  (Paywall).  I always find Andrew’s articles an interesting read.  This time he looks at a big source of the problem for Winnipeg. 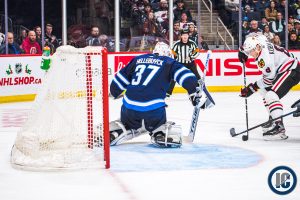 The Athletic Winnipeg:  Who is the best prankster, worst chirper and best binge-worthy show.  (Paywall).  Getting some insight into the Jets via this player poll.

Global News:  Indigenous-inspired Jets, Moose jerseys being auctioned off to support Winnipeg youth programming.  The money raised will help support this worthwhile endevour.  The Jets decal is nice but the Moose jerseys are fantastic and I’m sure we’ll be seeing them worn around Bell MTS Place soon enough.

TSN:   Will Oilers, Flames, Canucks gamble? Can Jets fill gaps?  The Canadian teams in the NHL’s Western Conference have plenty to ponder with the trade deadline looming. Ryan Rishaug, Frank Seravalli and Jamie McLennan address the needs of the Jets, Oilers, Flames and Canucks as each team looks to improve its roster not only for the present, but also for the future.