Note:  The Jets lost a tough one last night 5-2 to the Chicago Blackhawks to kick off the three game road trip although the biggest loss could be to Adam Lowry who was knocked from the game after a blindside hit by Drake Caggiula in the first period. Jets Head Coach Paul Maurice didn’t have an update following the game but Lowry was seen in a sling. Update: Lowry will be out at least a month.  The Jets are in Carolina today where they will practice as they get ready to face the Hurricanes on Tuesday night.  Be sure to check back for the Practice Report.

Note II:  The Moose concluded the homestand with a big 5-1 win yesterday over the Rocket.  Today they are off but will be back on the ice on Tuesday for practice. 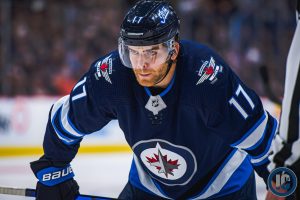 The Athletic Winnipeg:  ‘This is the NHL. You get judged by wins and losses’.  (Paywall).  Well right now the wins aren’t coming for this squad and if the Jets 5-on-5 play doesn’t get any better it isn’t likely to change.  Murat has more from Chicago.

Chicago Tribune:  Patrick Kane joins Stan Mikita, Bobby Hull and Denis Savard as only Blackhawks to score 1,000 points in 5-2 win over the Jets.  Pretty elite company for the winger from Buffalo.

Guests: Murat Ates of The Athletic Winnipeg (14:13) and Jimmy Greenfield of The Chicago Tribune (47:20)