The Moose came into this afternoon’s game having lost two of three games on this four-game homestand including a 3-0 loss to Laval on Saturday afternoon. 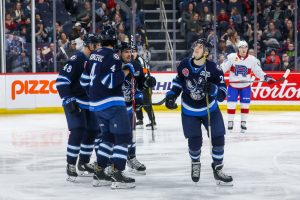 The Moose were looking to get out to a good start and that is just what they did as Andrei Chibisov turned and fired a shot into the back of the Rocket net just 1:41 into this contest. Chibisov and his linemates Kristian Reichel and Michael Spacek have been doing a lot of little things well lately and they were rewarded on the scoreboard. The goal was later changed to Reichel from Chibisov and Spacek.  Shots favoured the visitors 13-7 after 20 minutes.

The middle frame also started off well for Manitoba as JC Lipon dug a puck out from behind the Rocket net and fed CJ Suess who buried it upstairs off the backhand to make it a 2-0 Moose lead just 1:58 into the period. They added to this total when JC Lipon intercepted a pass across on a penalty kill and fired this rocket past Rocket goalie Keith Kinkaid to make it a 3-0 game.

JC Lipon having himself a game. The veteran rockets a shot short handed to give the Moose a 3-0 lead. pic.twitter.com/ZQWAxOHne1

The Moose would continue to add to their lead as Michael Spacek fired a Kristian Vesalainen pass during a Moose power play and on a delayed penalty call to make it a 4-0 game. Late in the second period (36.2 seconds left to be precise) the Rocket got one back. And similar to the Moose fourth goal it was during a power play but on a delayed penalty call. It was scored by Manitoban Josh Brook (from Roblin, MB).  The middle frame would end 4-1 for Manitoba with shots continuing to favour Laval 27-17.

To start the third period a familiar theme continued as Rocket goalie Keith Kinkaid thought he had the puck covered but he didn’t quite and the ref allowed play to continue. Cole Maier buried it to make it 5-1 for Manitoba.

That was just the bounce back game the Moose needed to have as they end the homestand with a 5-1 win over the Rocket to improve to 20-24-0-0. Lots of production and good goaltending.

JC Lipon moved into third spot in the franchise for points with his 213th points (the assist to Suess on the second Manitoba goal).  His shorthanded goal was the cherry on top.

The Moose are off on Monday.  They will be back on the ice for practice on Tuesday.