Note:  The Jets left Nashville with a big 2-1 victory over a division rival as they continued to roll in November improving to 7-1-1 this month.  Connor Hellebuyck continues to be the difference for this team as he improved to a 5-1-1 in November with a .943 save%.  The team will practice today in Dallas and will conclude the road trip against the Stars tomorrow night.  Check out the Practice Report for the latest news and audio.

Note II:  The Moose will look to continue their winning ways as they kick off seven games on the road tonight in Belleville.  They have won six straight games and eight of their last nine.  They will be without Seth Griffith who left the last home game after taking a puck to the mouth and could join the team for their weekend series with Toronto.  You can check out Monday’s Practice Report to get updated with the latest news from the Jets farm club.  Puck drop against the Senators is at 6 pm.

Winnipeg Sun:  Jets hold on for win over Predators.  Scott recaps the action from his spot inside Bridgestone Arena.

The Tennessean:  Hellebuyck’s 38 saves lead Jets past Predators 2-1. Read about the game from the perspective of someone who covers the Jets opposition. 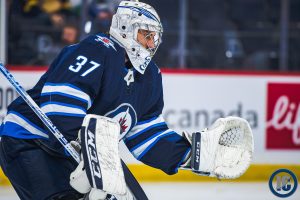 TSN:  Red Hot Hellebuyck carrying Jets.  Nobody around these parts will be surprised to read that headline and this was written before he put up 38 stops on the Predators last night.

The Athletic Winnipeg:  How joining the Jets helped Nathan Beaulieu put his disappointment behind.  (Paywall).   Ken had a chance to catch up with Nathan Beaulieu to get his thoughts on his turnaround here in Winnipeg.

Game 22: Jets 2 Predators 1 post-game recap
Elliotte Friedman: Decision on whether or not to contest Winnipeg Jets suspension of Dustin Byfuglien is coming soon