A look at the Moose practice today at the Bell MTS Place before their seven-game road trip. 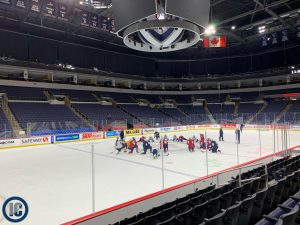 The Moose concluded this four game homestand with a 5-2 win yesterday afternoon over the Rampage.  This Manitoba squad have won six straight games and eight of their last nine games to put themselves back into the playoff conversation after they started the season 1-7-0-0.  They currently sit in 3rd spot in the Central with a 9-8-0-0 record.

Seth Griffith wasn’t on the ice this morning for today’s skate.  He left the game in the 2nd period of Sunday’s game after he had a puck redirected into his face.  Emile Poirier was up on the top line with Jansen Harkins and Andrei Chibisov for practice.  Logan Stanley practiced again with the team although he continues to wear a non-contact uniform.

Two weeks after Jansen Harkins received the award Moose goalie Mikhail Berdin was the recipient after posting a 4-0-0 record, making 148 saves of the 153 shots he faced for a 1.24 GAA and a .967 save percentage.  When asked about what it means to win he initially wanted to credit the team and they’re getting all eight points during this four-game homestand.  But when prodded about what the award means to him personally  he indicated “I’m excited, I don’t want to lie, I’m happy.  We win games, like everything good right now.”.

Yesterday during the game against the Rampage forward Jordan Nolan got a little too chippy as he tried to get to a puck that Berdin clearly had covered.  The Russian netminder wasn’t too pleased and started throwing some punches at the very tough Nolan.  Today I asked him about it “So I make a save. He didn’t try play rebound because I already had puck. He try to like hit me. K, it’s my fucking crease, like get the fuck out of here you know. It’s my zone.  I don’t care, like guys tell me its a tough guy, I don’t care whose he like. It’s my zone. Play puck, if it’s a rebound, just play it. But don’t touch me. I’m a goalie.”  That is a gold quote from the top Jets goalie prospect.

Here is the video from today’s interview:

Via @russ_sportsguy for those who wanted Berdin video of his response to my question about his tussle with Jordan Nolan. pic.twitter.com/WPVSNYDm9D

You can listen to the above quote unedited here:

He has been referenced (by me) as the forgotten member of the vaunted Jets 2015 draft class but 2nd rounder Jansen Harkins continues to impress this season.  His points streak has hit nine games (3G 13A) as he rolls along in his third full season as a pro.  He has five goals and 15 assists for 20 points in 17 games for Manitoba this season which is closing in on his career high for points (31) which he achieved in 71 games last season with the Moose.  “It was kinda my second half last year where I started to turn the page, turn the corner I guess, just try to keep the momentum going into this year and so far throughout the year it’s been working.”.

Harkins left the ice briefly in the 1st period of Sunday’s game and while it looked bad from our position in the broadcast booth he returned to the ice almost the next shift.  “Just an awkward play on the face-off.  Just fell down.  I think their centre kinda fell over top of me.  Just a lot of pressure on my arm.  I wasn’t like worried but just a little concerned.  Didn’t know what the feeling was so just wanted to make sure everything was OK.  Came back pretty quick and got on the power play right away so that kinda eases the pain.”

Coach Vincent was asked about the growth in Harkins game “We gave him an opportunity.  Sometimes a door gets opened for you and you take advantage of it or not.  And he did.  So this year he’s in the middle.  He’s playing with more offensive players, more minutes.  He’s taking advantage of those opportunities.  But at the end of the day what I know for sure is the time he’s spent in the gym, studying the game, spending time with the assistant coaches learning what needs to be done at this level.  His own investment in himself that’s the product we’re seeing right now.  We work with him, we did our part but the main part was him still believing in himself, never giving up and working extremely hard in practices and in the gym.”.

When the Jets signed free agent Andrei Chibisov back on June 1st not much was really known about the forward from Russia aside from the fact that the Jets has scouted him when he was playing in the KHL.  He showed very well in training camp for the Jets but when it came time to make their AHL assignments he was sent down to the AHL to continue his development.  On the ice he continues to contribute in a big way as he is a bull with the puck but also shows finish, like in yesterday’s game when he took a nifty pass from Jansen Harkins and scored with 0.07 seconds left on the clock in the 2nd period to tie the game.

Andrei Chibisov does it with .7 seconds left in the 2nd period. pic.twitter.com/q4M3V7Ok84

In total he has four goals and seven assists for 11 points in 16 games. He has found some really nice chemistry on the Moose top line with Jansen Harkins and Seth Griffith.

While there is a language barrier, the help of fellow Russian Mikhail Berdin, has aided Chibisov into acclimatizing to life here in Winnipeg.  Berdin on whether Chibisov is more comfortable here in Winnipeg “Oh ya for sure.  He understands almost everything right now.  He started talking to the guys, his English get better.  He started liking food here and everything good.”  It helps the duo that there are Russian speakers here in Winnipeg who the pair have met although Berdin didn’t want to share how they came to meet them saying with a chuckle “I don’t want to tell story right now.”.

I’ve been asked if Jets 2017 1st round pick Kristian Vesalainen is a bust.  Worth noting I had similar questions asked of me about Jets 2013 1st round pick Josh Morrissey when he was playing for the Moose.  The answer then as it is now is that guys need time to develop and despite the instant gratification society we live in not everyone will be NHL ready following their being drafted. Vesalainen’s path last season has been well documented but he has begun the year with the Moose and despite not having a ton of success (in terms of points) has still maintained a positive attitude.  You can see it post-game and we saw it today as he smiled and joked with his teammates on the ice during Moose practice.

Coach Vincent was asked about the Finnish forward today “We meet with the players individually on a daily basis and Ves, his maturity level is way above average. When you talk to him and you ask him ‘What’s your daily routine? How do you get ready for a hockey game? What do you do after a game? What do you do on a practice day?’ he knows exactly what needs to be done. He knows himself so he’s done a lot of good things. When you look at Ves and the eye test, I call it the eye test, it’s live during the games, when you look at him and you just focus on him, there’s a lot of good things that he does and he knows it and we reinforce that with him. Recently he’s been adding some points. I think his attitude has been amazing. He’s a real mature person for being such a young guy and he knows his routine and that’s a big step. That’s one of the things I’ve learned over the nine years with the Jets and the Moose is the guys that know their routines and have it established, they know what has to be done, what time to eat, what to eat, what time to go to bed, what do you need to do in order to get physically and mentally ready to play a hockey game at this level and to perform. Once they know that then they can evaluate themselves properly.”

He went on making a comparison to a pretty good 1st round pick of the Jets from 2015 “Another example is Kyle Connor. Back then his first 10-12 games with us weren’t very good but when I spoke to him after the games he knew exactly why, so his self evaluation was right and in Ves case it’s the same thing. He knows when he plays a good game, he knows when he makes a mistake and he has his daily routine in place and he’s sticking to his plan. He’s going to be fine. He’s going to be a really good player.”

Taste of the NHL:

Jets 2014 5th rounder CJ Suess got his first NHL recall by the Jets back on October 31st and played in his first NHL game on November 1st in San Jose and it is clear that it meant quite a bit to the Minnesota product “It was awesome.  Looking back on it now it was something I will never forget.  Just the experience as a whole.  Just from getting the call, getting to San Jose and over to Vegas was pretty cool.”  I asked him what a taste of the NHL can do for a prospect who wants to make the NHL and how he can achieve that while in the AHL “Makes you push for something.  You got a taste and you always want more.  You know what you need to do to get back up there and work on it while I’m down here.”.

Jets 2013 3rd round JC Lipon has spent most of his time as a pro in the American Hockey League either in St. John’s with the IceCaps or in Winnipeg with the Moose.  He played his 400th career game eight games ago and in yesterday’s contest he achieved his 200th point (71 goals & 129 assists) off a nifty no-look pass to Cole Maier for a shorthanded goal which tied the game.  Lipon has also played nine games for the Jets back in 2015-16.

As I indicated earlier in this report Seth Griffith left the game yesterday and didn’t return.  Coach Vincent today indicated “He got the puck in the face, lost a few teeth, some damage there.  He’s not going to be with us tomorrow (when the team leaves for Belleville) but he’s going to meet us at some point on the road.”  The Moose bench boss added the hope is Griffith will be with them in Toronto this weekend.

Coach told us yesterday that Logan Stanley will be on the road trip with the team and is expected to play at some point.  He has been out since mid October.

Moose will travel on Tuesday to Belleville as they get ready for the longest road trip of the season.  They will play seven games away from the friendly confines of Bell MTS Place.  It all gets going on Wednesday night when they take on the Senators at 6 pm.