Note:  The Jets will try to leave last night’s 4-0 loss to the Avalanche in the past after a successful homestand saw them go 2-1-1.  It was their first regulation loss in November and first loss to a central division opponent (although they haven’t played very many to this point in the season).  Today they are scheduled to practice at 11:00 AM at Bell MTS Place and will then leave for Florida as they get set to take on the Panthers tomorrow night.  Still a question as to whether they may take an extra forward for the trip (Update:  They recalled Michael Spacek).  Stay tuned for the Practice Report.

Note II:  The Moose had a day of practice on Tuesday as they look to keep their hot streak going.  They started this four-game homestand on Monday with a 4-1 win over the Stars and they will look for the sweep in the re-match this evening.  Morning skate gets going at 10:00 AM and then puck drop is at 7 pm.

Winnipeg Sun:  Little-known goalie stars as Avalanche blank Jets.  He may have been little known before last night but after his 40 save performance including eight on Patrik Laine alone there are plenty of folks who now know the name Adam Werner. 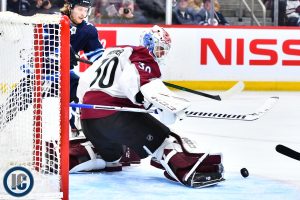 Winnipeg Free Press:  Goalie stones Jets in first NHL game.  (Paywall).  Unfortunately the folks back in Sweden wouldn’t have known when the day began that Werner would be making his NHL debut but by now they will know that the pride of Mariestad had a hell of a good start to his NHL career.

Winnipeg Free Press:  MacKinnon, Makar help depleted Avs squad bury Jets 4-0.  (Paywall).  These two were simply sensational with MacKinnon getting points on all four goals and Makar scoring once and hitting iron at least twice.  Hard to believe this Avs team is as injured as they are.

NHL.com:  Werner makes 40 saves in debut, Avalanche shut out Jets.   Don’t look now but the Avs have now won three straight after enduring a bit of a losing streak in a topsy-turvy central division.

Denver Post: Avalanche overcome Francouz injury to defeat Winnipeg for third straight win.  Read about the game from the perspective of someone who covers Colorado on a regular basis.

TSN:  Werner steals show with 40 saves in NHL debut.  After Pavel Francouz left the game following a collision 31 seconds into the game, back up Adam Werner stood on his head, making 40 saves to shutout the Jets. Mike Johnson has more on his play, and the strong performance by Nathan MacKinnon.