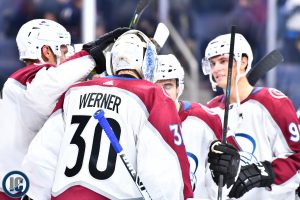 The Jets dropped the final game of their four game homestand 4-0 to the Colorado Avalanche on Tuesday night to slip to 10-8-1 on the season as they lose to a Central Division opponent for first time this season. The story of the game was Avalanche goalie Adam Werner who made 40 saves in his NHL debut.

– Brandon’s Matt Calvert picked up two assists, playing on Colorado’s top line
– Nathan MacKinnon was a beast, finishing the game with 2G 2A in the win;
– Rookie defenceman Cale Makar was excellent on the Avs blueline with a goal and two off the crossbar.

The Jets are scheduled to practice tomorrow at 11 AM before they head out on the road for four games.  You can kick start your Wednesday with the Morning Papers which go live at 7 am on illegalcurve.com.