Note:  It was a busy Monday in Jets land with news that Tucker Poolman is day-to-day although based on practice it sounds like the Jets could get Nathan Beaulieu back for tonight’s game against New Jersey.  It is an optional morning skate at 10:30 AM along with a media availability so be sure to check back for the Pre-game Report.  Puck drop is at 7 PM.

Note II:  Another twist to the Dustin Byfuglien saga according to Darren Dreger who yesterday indicated that the NHLPA continues to gather information and that it is likely a grievance will be filed by the PA once the matter has been fully reviewed.

Note III:  The Moose are in Milwaukee today and will practice at 12:30 PM as they get set for tomorrow’s school day game against the Admirals which gets underway at 10:30 AM.  The Moose got CJ Suess back as he was assigned yesterday and it was announced that Jansen Harkins was the CCM/AHL Player of the Week after putting up one goal and seven assists this past weekend.

Sportsnet:  31 Thoughts.  Entire preamble is about Dustin Byfuglien as is point 1.

The Athletic Winnipeg:  Small details and big decisions will determine the Jets’ Dustin Byfuglien saga.  (Paywall).  I gave you a brief overview of the Byfuglien saga (above) and Murat goes into the weeds with this one on the various ways this could go from a cap perspective.

Winnipeg Sun:  Roslovic gaining trust of Jets coach.  Quite the interplay between the Jets bench boss and the 2015 1st rounder.

Winnipeg Free Press:  Morrissey focused on making plays; not worried about mistakes.  (Paywall).  Lots on the shoulders of the Jets 2013 1st round pick. 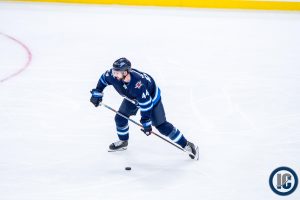 Winnipeg Free Press:  Beaulieu, Ehlers cringe after watching Ottawa rookie’s frightening collision.  (Paywall).  It was tough to watch for anyone but for young athletes it is a reminder that they are not immortal.

The Athletic Winnipeg:  Are the Jets starting to find traction? 5 observations from their recent road trip.  (Paywall).  Ken reflects on the past week and his five observations include: 1) Bumper sticker beware. 2) Paul Maurice changes approach (sort of). 3) Power play still a story. 4) Laurent Brossoit fights through it. 5) Ville Heinola in the right place (for now).

TSN:  Jets hope to keep momentum going Tuesday against Devils.  After being decimated by injuries, the Jets’ up and down season is starting to gain traction. They’ve picked up six of a possible eight points in their last four games and wrapped up their road trip with a win in overtime against the Golden Knights, and aim to keep the ball rolling Tuesday when they host the Devils.