He may be healing but 33 continues to make news. 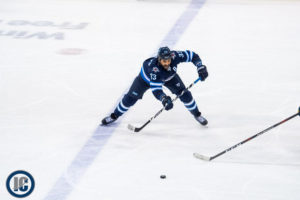 The saga which seems to be never ending continues to drag along.   To recap:

On Saturday Headlines both Elliotte Friedman and Chris Johnston provided updates regarding the Dustin Byfuglien situation.

The newsiest item from the report was that in the course of undergoing ankle surgery, it was discovered that Dustin Byfuglien had suffered a broken bone in his foot, but the specific time-frame as to when the suspended Jets defenceman suffered that injury is in dispute (i.e. was it a lingering injury from last season, or a relatively recent malady).

In addition to the report of the broken bone, Elliotte Friedman reported that the Winnipeg Jets deemed Dustin Byfuglien “fit to play” following his exit physical at the conclusion of the Jets’ 2018-19 season.

Johnston added that while Byfuglien was uncertain about his future he has “since indicated a willingness to return and play.”

Chris Johnston also wrote about it on Sunday:

The Jets are taking the position that Byfuglien should remain suspended without pay until he is fit to play since he was cleared by doctors at last year’s end-of-season medicals and didn’t report to training camp for fitness testing in September.

NHLPA continues to gather information in the Byfuglien case. It’s likely a grievance will be filed by the PA once the matter has been fully reviewed. NHL head office will contest if/when it gets to that point.

Which all adds up to what exactly?  Not much really.

We know that Byfuglien had surgery in Minnesota a few weeks back which will take anywhere from a few months (i.e. new year -Friedman) to four months (Dreger).  While he heals this process will play out between the NHL and NHLPA and it doesn’t appear that it will be resolved anytime soon.

Which means that the status quo will continue and his $7,600,000 in cap space will also remain in limbo.