Note: The Jets returned from Nevada on Sunday following a successful weekend which saw them win on Friday in San Jose and then Saturday in Las Vegas.  Today the team is scheduled to practice at 11 am at Bell MTS Place.  Be sure to check back for the Practice Report.

Note III:  The Moose needed to keep the good times rolling and that’s just what they did on Sunday when they bent but didn’t break against the Griffins finishing with a 7-4 win.  The D pairing of Sami Niku and Ville Heinola was dominant, Cam Schilling had a 500th AHL game to remember, Seth Griffith had a hat trick and Jansen Harkins had a weekend to remember.  The Moose are set to practice at 11 AM out at the IcePlex.

The Athletic Winnipeg:  Are the Jets starting to find traction? 5 observations from their recent road trip.  (Paywall).  Ken reflects on the past week and his five observations include: 1) Bumper sticker beware. 2) Paul Maurice changes approach (sort of). 3) Power play still a story. 4) Laurent Brossoit fights through it. 5) Ville Heinola in the right place (for now).

Winnipeg Sun:  Jets like all-forward look in OT win over Vegas.  When you’ve got high end talent available and since most teams are thinking offence anyways in OT it makes a lot of sense.

Winnipeg Sun: No suspension for Jets’ Lowry for hit on Tuch.  I watched it a couple of times and I really didn’t think it merited any discipline. 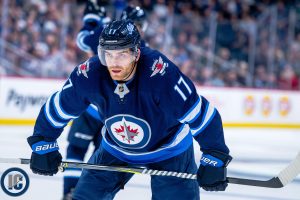 Winnipeg Sun: Jets’ identity still hard to figure from here.  It feels like this is going to be a storyline for some time.

Winnipeg Free Press:  Jets turn tables after Knights brouhaha.  (Paywall).  The Jets all pointed to the Lowry fight as a turning point in the game.

Sportsnet:  Jets, Byfuglien have complicated negotiation ahead.  Chris wrote about the big discussion point he and Friedman spoke about on Saturday night.

Illegal Curve:  Moose start a winning streak after they defeat the Griffins 7-4.  Recap of yesterday afternoon’s contest which had quite a bit going on.