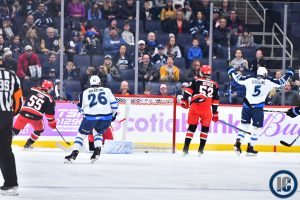 After picking up their first home win against the Griffins on Saturday thanks in large part to five points from Jansen Harkins the Moose were back in action Sunday afternoon in a re-match with their division rival.  With veteran Ryan White sidelined for awhile from yesterday’s game the coaching staff inserted defenceman Nelson Nogier onto the third line.  With the addition of Leon Gawanke and Luke Green it gave them a youthful backend and allowed them to have a more veteran guy to toss on the blueline if need be.

It isn’t unusual to see tempers flare and just 35 seconds that’s just what happened when JC Lipon and Givani Smith dropped the gloves and were tossed out of the game because the refs gave them both game misconducts for fighting at puck drop.  Once the game settled a bit the Moose continued their good habits from yesterday’s game and opened the scoring just over five minutes into the 1st period when Seth Griffith, on a nifty give and go with Andrei Chibisov, put the puck past Griffins netminder Filip Larsson. Just after it was announced that Cam Schilling was playing in his 500th AHL game today he scores to make it 2-0 for the Moose on a beauty pass by rookie defenceman Leon Gawanke. Nice memory for Schilling who was playing in his 500th AHL game. Grand Rapids would score a late goal to make it a one goal deficit for the visitors after 20 minutes.

Jansen Harkins kept his roll going scoring to make it a 3-1 early in the 2nd period. They added to their lead on the power play when Vesalainen got it to Chibisov who fed Griffith for his second goal of the game which made it a 4-1 lead with that power play goal. And it looked like the Moose were gonna cruise to a victory but two quick goals by Grand Rapids made it a 4-3 game. The third Griffins goal was controversial as Chris Terry got his shoulder up high on Joona Luoto to seperate him from the puck and then with the Finnish forward dazed on the ice he ripped a shot past Mikhail Berdin. While Luoto wasn’t happy and voice his displeasure to the refs the goal stood.

Grand Rapids used a 3rd period power play to complete the comeback as they Chris Terry scored again. But the Moose wouldn’t wilt under pressure and just like JC Lipon yesterday Cam Schilling scored two goals in his milestone game as he gave Manitoba a 5-4 lead with the power play goal. It was set up by a deceptively nice pass from Ville Heiniola. Sami Niku with his second goal in as many games of the long-range variety as he shot it from the Moose goal line into the empty Griffins net to make it 6-4 for Manitoba. And then Seth Griffith would complete the hat trick as he scored into the empty net to make it 7-4 on a unselfish play from Jansen Harkins who could have taken a shot but passed it up (literally) so hit teammate could hit the milestone.

Jansen Harkins put up 1G 7A in the two games this weekend.

The Moose start a three-game road trip in Milwaukee on Wednesday with the always fun school day game getting underway at 10:30 am.