A recap of the Moose win over the Griffins. 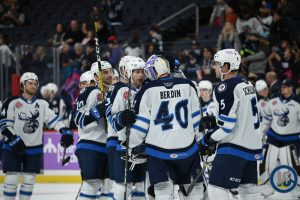 The Moose came into this afternoon’s contest with a “must win” attitude after having lost six straight games including one to the Griffins in Grand Rapids last weekend.  The team did get a boost with the Jets sending Ville Heinola down to the AHL and with Sami Niku returning from injury.

It looked like it was going to be more of the same as the Moose gave up the opening goal of the contest to Grand Rapids.  But Sami Niku scored his first goal of the season to tie it up.  The hard work was done by Jansen Harkins who stripped a Griffins player of the puck in the neutral zone, drove in the Grand Rapids end, drew two defenders to himself and then fed Niku who made no mistake to tie the game.  The tie was short lived however as the visitors regained the lead a few minutes later.  And then just like that Seth Griffith with a nifty move split the D to tie the game.  Four goals in the first 10 minutes of the game.  Looked like it was gonna be quite the track meet.

The middle frame was a bit more tame than the opening one as the teams settled into a rhythm.  Ryan White was setting a tone with some big hits but that cost him as one hit he threw ended up sending him to the bench for attention from the team staff and ultimately saw him leave for the dressing room.  Jansen Harkins, who already had two primary assists, had a chance to score on the breakaway.  While he didn’t get it to go he was visible the entire night.  JC Lipon would score on a late power play in the 2nd to give the home side their first lead of the game.  Special night for Lipon as the Jets 2013 3rd round pick was playing in his 400th AHL game for this organization (between the IceCaps and Moose). No surprise but Harkins picked up another assist (his third of the game) on the go ahead goal. The 2nd would end with Manitoba up 3-2 after 40 minutes.

After Michael Spacek drew a penalty JC Lipon scored again on the power play to make it a 4-2 game in the 3rd period.  Wouldn’t you know it that Jansen Harkins got another assist.  The Griffins would score on a power play of their own to make it a one-goal game before Seth Griffith put home his second of the game into the empty net to seal the deal.  Of course the night wouldn’t be complete with a Harkins assist…his fifth of the game.

Ville Heinola is an unbelievable talent.  Remarkable cool under pressure.  Pretty clear from coach Vincent’s assessment after the game that he knows the organization has a special player in their 2019 1st round pick.

Veteran forward Ryan White left the game in the 2nd period after he laid out a big hit.  He seemed uncomfortable as he made his way back to the bench and then spent some time talking to the team staff.  He would eventually head to the dressing room and wouldn’t return for the 3rd period.  After the game coach Vincent indicated that “I think he is going to be out for a few weeks but I don’t have final result.  But it is not something day-to-day.”

The Moose will complete the weekend series at Bell MTS Place tomorrow afternoon in a re-match against the Griffins.  Puck drop is at 2 pm.