The smooth-skating D man returns to the lineup. 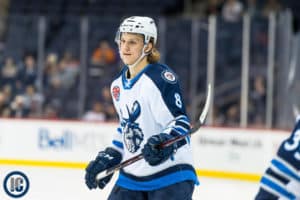 Smooth-skating defenceman Sami Niku has played just three games this season for the Moose with his last game coming October 11th.  Since that time he has been held out of the lineup as he recovered from a lower-body injury that has been nagging him.

Today, during his media availability after the Moose practiced, head coach Pascal Vincent confirmed that Niku will return to the lineup tomorrow when they face the Grand Rapids Griffins at 2 pm here in Winnipeg.  The organization took a smart approach not rushing him back and allowing him to heal properly and the Manitoba bench boss acknowledged the job they did for him off the ice “Our medical staff did a great job at taking care of him.  So he’s back 100% now.”.

You can hear the full chat including his answer about Niku dealing with the disappointment of a missed opportunity with the big club.  The Niku talk begins at 5:07.