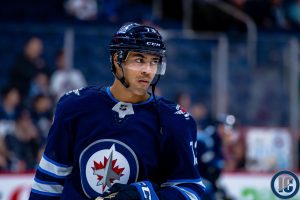 Winnipeg Jets 2014 5th round pick CJ Suess has earned his first recall to the big club which the team announced today.  The Minnesota product is a second year pro who was having a nice start in his rookie season before an injury cost him the remainder of the 2018-19 campaign. Suess is a defensively responsible forward who has one goal in eight games with a Moose team that has struggled out of the gate (only one win in seven games).

Suess signed a one-year contact with the Jets this past summer.

It was quite the trip for Suess just to make it to San Jose.  Suess went from Winnipeg to Minneapolis last night and then he flew to San Francisco this morning and then took a car to San Jose.

Suess said he found out yesterday after Moose practice that he would be recalled by the Jets. Suess phoned his mom and then his sister to let them know he was getting his first call up to the NHL. “There’s still another thing I’d like to show her and that’s playing in a (Jets) game.”

Apple PodcastsAndroidRSS
Game 14: Jets vs. Sharks projected lines
Sami Niku will return to the Manitoba Moose lineup for game against Griffins on Saturday