Note:  The Jets were off on Sunday but that didn’t stop them from making news as forward Adam Lowry will have a hearing with Player Safety for his hit on Oliver Kylinton at the end of the 2nd period at the Heritage Classic on Saturday.  Stay tuned for that news.  The team meanwhile will practice in Anaheim today at 1 pm CDT as they get set to face the Ducks tomorrow night.  Check out the Practice Report for more info.

Note II:  Jets GM Kevin Cheveldayoff was chatting with the Hockey Central Panel in advance of the Heritage Classic.  Topics he was asked about included Blake Wheeler’s funk, whether there is a time limit for Dustin Byfuglien and Paul Maurice being in the final year of his deal.  For more click here.

Note III:  The Moose are back in Winnipeg and will have a week of practice as they try to sort out what is wrong with this squad.  The Moose have lost six straight games and sit 1-7-0 on the season which puts them in 30th place (in a 31 team league).  The good news for Manitoba is they’ve still got almost 90% of the season left to get things turned around.  They are expected to lose a player or two (if Lowry is suspended I suspect the Jets would pull up a pair of players from their AHL squad).  I’m not a betting man but I suspect it will be Joona Luoto or Andrei Chibisov (or both) who get the call up to the parent club.  Update:  The Jets have recalled Logan Shaw to the big club.

Winnipeg Free Press:  Young Jets take big winning step in search for identity.  (Paywall).  There is that identity word again.  Was it simply one game of 82 on the schedule or was it something more that this team can build upon?  Mike McIntyre looks back at what the Heritage Classic win means for Winnipeg. 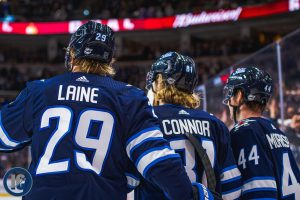 Winnipeg Sun:  Little closes chapter on three-year Heritage Classic wait.  After missing 2016 it was pretty clear leading up to the event this weekend was very important to the veteran centre.

Sportsnet:  Atmosphere at outdoor games have teams itching to play.  In addition to a number of NHL notes Chris Johnston writes about Jets goalie Connor Hellebuyck.

The Athletic Winnipeg:  Three years later, Bryan Little finally has his Heritage Classic moment.  (Paywall).  Little has certainly been the target of some slings and arrows from a portion of the fan base that doesn’t see him as a viable number two centre.  Ken writes about the veteran forward getting a chance not just to play in his first outdoor game but to deliver on the big stage.

The Athletic Winnipeg:  The Heritage Classic once again celebrates the nostalgia, purity and beauty of hockey.  (Paywall).  If you grew up in a northern environment you likely can hearken back to your days as a kid lacing up the skates for a good game of shiny with family and friends.  Murat with a look at how the Heritage Classic was the game in its purest form.

CBC:  Teemu Selanne reflects on trade from Winnipeg Jets in new memoir.  Plenty of fans went to Chapters Polo Park and St. Vital yesterday to meet the Finnish Flash as he tours across Canada to promote the new book.

Topics: Jets/Kings recap, Mason Appleton will be out at least a month after breaking a bone in his foot before practice on Friday, Blake Wheeler’s struggles, The Jets goal scoring struggles, Jets claim Luca Sbisa off waivers from the Anaheim Ducks, The Jets Power Play struggles

Topics: Continuing to preview the Jets vs. Flames Heritage Classic game, Have the Nashville Predators been overlooked, Colorado Avalanche winger Mikko Rantanen out week-to-week with a lower body injury, Cheers/Jeers