Jets hitting the ice in Anaheim as they get ready for the Ducks tomorrow night. 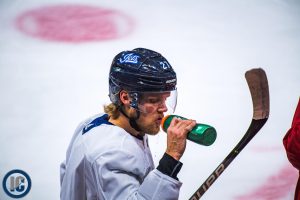 The Jets took the day off on Sunday in California following their 2-1 OT win in Regina on Saturday night in the Heritage Classic.

The Jets announced that they had recalled Logan Shaw from the Moose and that they placed Mason Appleton on IR.

Adam Lowry was a bit late to join the Jets in practice according to Ted Wyman of the Winnipeg Sun.  He was presumably dealing with a call from NHL Player Safety.  Ted also indicates that Nathan Beaulieu is in a yellow non-contact uniform for the second straight practice.

Ted adds that Patrik Laine got bumped in the corner by new guy Luca Sbisa and then the Finnish forward left the ice.  That ain’t good for business.

Via Mitchell Clinton of Jets TV.

Coach Maurice:  On Laine leaving the ice early today, does he have an update?  Getting the players on the ice today.  Putting Kyle Connor back up with Scheifele and Wheeler.  Are the recent numbers a good indication of a commitment to team defence?  On opportunities lost with players missing the net.  How good is playing the Heritage Classic and an off day for this team?  Any update on Nathan Beaulieu?

With Patrik Laine leaving the ice early Jets bench boss was asked if he had any concerns with Laine’s status for tomorrow “It wasn’t anything major and he’s been dealing with some nicks like everybody else but we’ll have to wait to see how he’s tomorrow before we make a decision on him.”.

Coach Maurice was also asked about the status of defenceman Nathan Beaulieu who has been out since being injured in the final pre-season game “He’s now where he can get into controlled bumping.  He may be available for us at the end of this trip, whether it’s San Jose, Vegas.  If he’s feeling real good we’ll consider him and if not we’ll just push it back a couple more days.  But he’s right there.”.

Adam Lowry has been suspended for two games.

The Jets will close out their final game in October tomorrow night when they face the Ducks in Anaheim at 9 pm CDT.  Be sure to keep it locked to illegalcurve.com for the AM Papers which go live at 7 AM.