Note:  On Friday the Jets had a chance to practice inside Mosaic Stadium for the first time as they got ready for tonight’s game against the Flames in the Heritage Classic in Regina.  But prior to hitting the ice the team took a hit as third year pro Mason Appleton broke a bone in his foot warming up with his teammates and will miss quite awhile (Maurice indicated it would be a month before he should be asked about Appleton again).  The Jets have a media availability at 11:30 AM CDT so stay tuned to the pre-game report for lineup and audio ahead of the game.  Puck drop is at 9 pm.

Note II:  The Moose are in a tail spin having lost five straight games although last night they probably deserved a better fate having outshot the Griffins 36-18 at one point but ultimately falling 4-1 in Grand Rapids.  They will conclude their two-game road trip tonight in Chicago although they will likely be sans a forward with the news about Mason Appleton.  My guess is it will be Andrei Chibisov or Joona Luoto.

Note III:    Tune in for three hours of Winnipeg Jets and NHL talk on the Illegal Curve Hockey Show on TSN 1290 Winnipeg starting at 9 am as we kick off Heritage Classic coverage.  We’ll have three hours of hockey talk so join us.

Winnipeg Sun: Hockey community rallying behind Jets legend Hawerchuk as he battles cancer.  The man known as Ducky has many, many fans and folks wishing him the best as he engages in the biggest fight of his life.

Winnipeg Free Press:  Jets hope for positive game on outdoor rink.  (Paywall).  While the experience is nice this team knows that two points are critical to earn this evening.

Winnipeg Free Press:  Jets have many problems, but Hellebuyck isn’t one of them.  (Paywall).  Andrew takes a look at the numbers behind the Jets top netminder. 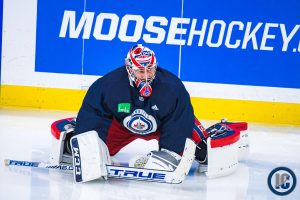 The Athletic Winnipeg:  Jets players stroll down memory lane heading into Heritage Classic.  (Paywall).  Ken spoke one-on-one with Perreault for this story as well as with a number of other Jets for their pond hockey memories.

Sportsnet:  Jets struggling to rediscover contender identity with gutted blue line.  Is anyone else already sick of the word ‘identity’ yet?

Sportsnet: Weather could play huge factor for Flames, Jets in Heritage Classic. Sean Reynolds and Eric Franics break down the weather conditions in Regina ahead of the 2019 Heritage Classic.

TSN: What will Regina have in store as host of Heritage Classic between Flames, Jets?  Ahead of today’s Heritage Classic between the Flames and Jets, Jermain Franklin and TSN Hockey Insider Darren Dreger discuss why Regina’s Mosaic Stadium was chosen as the host for the game, whether or not the neutral venue gives either team an advantage and the challenge the players will have dealing with the weather.