USA Today:  Final NHL power rankings.  Jets finish the season ranked 22nd although you might take a double take as they have the Bolts logo up instead of the Jets.

Winnipeg Free Press:  GM Chevy sticks with long-range plan of improving team through development.  Can Jets fans put up with a few years of mediocrity for the promise of a vision which includes building a cup contender?  I would suggest that Jets fans have shown 15 years of patience, so a few more with actual NHL hockey being played in the city, might be slightly more tolerable.  At the same time, we have been down this road before (Jets of mid 90’s were supposed to be that team) so it will not be easy to miss the playoffs for a number of seasons with an abstract promise of becoming a league super power.

Winnipeg Free Press:  Jets GM short on drama and intrigue in media address.  The truth is that the Jets GM could have said just about anything yesterday without fear of reprisal from a fan base still basking in the glow of their return to the NHL.

Winnipeg Sun:  Jets GM cool with Claude.  Kevin Cheveldayoff might be a rookie GM but it isn’t as if he hasn’t been in the NHL for years and knows exactly how to deflect answers as skillfully as a politician, which is probably a good attribute for the general manager of an NHL hockey team.  Thankfully for the media (and fans), coach Noel isn’t as guarded so the sound bites are a lot more juicy.

Winnipeg Sun:  Cheveldayoff optimistic, realistic about future.  For any fans who want the Jets to mortgage the future to try and win immediately we point you at the Buffalo Sabres and what can happen when you try to spend your way to victory.  Long term vision requires patience, which is not a virtue possessed by many these days.  Will be interesting to see at the 2012 Entry Draft (won last night by the Edmonton Oilers for 3rd season in a row) if he drafts a player ready to make the jump to the NHL immediately or will be more of a long term commitment like Mark Scheifele.

Winnipeg Sun:  Pavelec, Kane top grades in Jets season.  Good grades by Ken except in my opinion he made 3 mistakes. Glass(C+), Slater(B-) and Thorburn(C) should have been rated a G an S and a T. 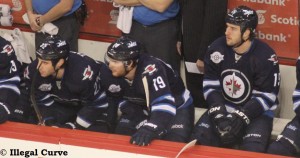 Winnipeg Sun:  Real test for Jets GM comes now.  As folks in Toronto are looking to tar and feather Leafs GM Brian Burke for the apparent mismanagement of the 5 year rebuild he had promised, Jets GM is still enjoying the honeymoon phase of his relationship with the Winnipeg Jets fan base.  However Burke’s winter of discontent, could become the same for Cheveldayoff this summer as he has a number of moves to make that will have the entire province analyzing for months.

Chris D:  Cheveldayoff optimistic about next season.  365 days from now it will be interesting to see where this team is.

Illegal Curve:  GM Cheveldayoff season finale press conference.  If you would like to listen to the 42 minute presser which is discussed in the majority of the articles above, we have it in its entirety.

Illegal Curve:  A look back – 5 Reasons the Jets will and will not make the playoffs.  Ez was optimistic whereas Richard was more pragmatic, but both took a hard look at the Jets before the season began and gave their 5 reasons why they felt they would or would not be battling in April.

The Telegram:  Home dates set for first-round.  The AHL is a different animal and the playoff arrangements are slightly modified from how they are in the NHL.  Of course with Winnipeg having been home to the Moose many are familiar with the options the higher seeds have.  The Caps, unlike the Jets, were road warriors so it is not surprising that they would be unafraid to play the first two games on the road.

Pittsburgh Post-Gazette:  Series likely to hinge on whose special teams are special.  Count me as someone who cannot wait for this series to begin.  I think it is going to be the absolutely best series of the 1st round.

Philadelphia Daily News:  Hot goalie for Cold War.  We know he isn’t afraid of Penguins (just bears, which doesn’t bode well if the Flyers advance and have to play the Bruins) and his high level of play to end the season should finally give the Flyers a boost unlike in years past.

Detroit Free Press:  Wings need a healthy Helm for playoff journey.  The pride of St. Andrews, Manitoba has blazing speed and has been an important cog in the winged wheel of Detroit.

The Tennessean:  Preds have the right mix for deep playoff run.  They are a solid franchise from the top down and after getting a taste for the 2nd round last season, are looking to move even further this year.  Eric Duhatschek believes they could compete for the West this spring.

National Post:  Canucks will keep Roberto Luongo on short leash.  For all the worry that he will be a flop this year, something tells me we are going to see some MVP form from the Canucks netminder this playoff.

Los Angeles Times:  Kings chances at success start and stop with goalie Jonathan Quick.  We have seen a hot goalie steal many a playoff series and for the Kings to knock off the defending Western Conference champs, that is exactly what Jonathan Quick will need to provide for L.A.