Note:  The Jets have to have a 23 man roster by 4 pm CT today and after they assigned five players to the Moose on Monday they are now at 24.  Speculation is that Sami Niku or Bryan Little will be on the IR to start the season and you can expect coach Paul Maurice to provide an update following practice which gets underway at 11 am.  Update:  In the end the Jets assigned Niku to the Moose, Little has a concussion but remains in the lineup (for now) and instead the team has placed Beaulieu on IR.

Note II:  Three (Comrie, Lipon & Nogier) of the five players (Luoto & Suess) the Jets assigned yesterday will require passing through waivers.  We shall see by 11 am CT today is there is any claims or if they are pass through waivers.  Update: Eric Comrie was claimed by the Coyotes, the Jets claimed Carl Dahlstrom from the Hawks and JC Lipon and Nelson Nogier cleared waivers and were assigned to the Moose.

Note III:  Monday really got going when Jets PR announced number changes for Ville Heinola and David Gustafsson which appeared to confirm that they would be sticking around with the team to start the season.

Note IV:  It was a big day for scrums on Monday as Jets GM Kevin Cheveldayoff spoke followed by Kyle Connor and Patrik Laine.

TSN:  Laine, Connor return, but plenty still in flux with Winnipeg Jets.  Dennis trades in his play-by-play microphone for a pen as he wrote about the state of things here in ‘Peg city.

Winnipeg Sun:  Laine, Connor looking ahead, putting long summer behind.  Not only are these two happy about it I suspect the entire team is pumped that they don’t have to answer questions about this saga anymore.

Winnipeg Sun:  Heinola, Gustafsson make the cut.  I thought one of the two would be on the team to start the regular season as I figured the Jets would keep Luoto and send Gustafsson back to Sweden.  Maybe that is an indication that Bryan Little could be on the shelf or maybe they just liked what they saw from the 2018 2nd rounder (I sure thought he had an excellent camp). 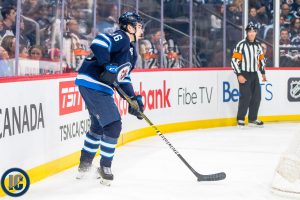 Winnipeg Free Press:  Winnipeg will be good: Laine vows to ‘score a lot of goals’.  (Paywall).  If he can return to the shooting percentage we saw him display in seasons one and two it seems highly likely that he will be a 50 goal scorer sooner rather than later.

Winnipeg Free Press:  Connor thrilled with deal; relieved one-man training camp over.  (Paywall).  His camp and the Jets brass were quiet about negotiations but the length of the contract was where most people though it would be.

Winnipeg Free Press: Heinola, Gustafsson crack Jets’ season-opening roster.  (Paywall).  While I never think it is  good idea to rush young players to the NHL the reality is if they can play at that level then it certainly shouldn’t harm their development.

The Athletic Winnipeg:  Three contracts and one clear theme — Kevin Cheveldayoff is in it for the long haul. (Paywall).  Murat attempts to glean additional information from the interviews given by the Jets GM.  Not an easy task.

The Athletic Winnipeg:  10 bold (and not so bold) predictions for the Jets this season.  (Paywall).  Ken and Murat combined for this one and they offer plenty in this article including: 1) Laine winning Rocket Richard. 2) PP will excel while PK gets shelled. 3) Scheifele will hit 100 points. 4) Finland takes over Winnipeg. 5) Hellebuyck will start less than 60 games. 6) Byfuglien will come back. 7) D corp will be better than most believe. 8) Paul Maurice will coach full season. 9) Jets face Stars in 1st round. 10) Jets won’t make playoffs but if they do they win at least one round.

Sportsnet: The best- and worst-case scenario for each team in the NHL’s Central Division.  The Jets and the rest of the central are given the best and worst case for the upcoming season.

Sportsnet:  Jets looking for well-rounded game from Patrik Laine this season.  Jeff Marek, Brian Burke and Elliotte Friedman discuss Patrik Laine and what will be expected from him this season with the Jets.

Sportsnet: Do Winnipeg Jets have a roster that can compete for Stanley Cup? Sean Reynolds reports from Winnipeg where there are questions surrounding the Jets roster.

TSN: Examining the differences in contracts for Laine, Connor. Patrik Laine and Kyle Connor each put an end to their contract negotiations with the Jets this past weekend but their deals were the complete opposite of each other. That’s Hockey discusses how their opposing personalities reflects their terms.

TSN:  Cheveldayoff did an ‘excellent job’ with Laine, Connor contracts.  It took awhile, but the Jets locked up their goal-scoring RFA wingers to contracts. Patrik Laine was given a two-year bridge deal, while Kyle Connor signed with Winnipeg long term. TSN Hockey analyst Dave Poulin grades the contracts GM Kevin Cheveldayoff handed out and explains why both deals, despite being completely different, make perfect sense.

TSN 1050 Toronto:  You don’t do what Laine’s done as a teenager in the NHL without confidence.  Jets general manager Kevin Cheveldayoff joins Andi Petrillo and Craig Button to discuss signing Patrik Laine and Kyle Connor to new deals, how the team is moving forward without Dustin Byfuglien and Paul Maurice’s impact behind the bench.