Note:  Jets training camp got underway on Friday and here is the Jets schedule and here is the roster broken down into two groups.  We heard from Jets GM Kevin Cheveldayoff, coach Paul Maurice and a number of players check out Day 1 of Training Camp.  Day 2 starts at 9 am with group 1 followed by group 2 at 12 noon.

Note II:  Ahead of training camp the team announced that defenceman Dustin Byfuglien has been granted a leave of absence.  By way of an update coach Paul Maurice and GM Kevin Cheveldayoff addressed the media on Friday morning and both indicated that Byfuglien needed “time” but that he and his family are fine.

Note III:  The Jets held their Fan Forum last night which also included them releasing their Heritage Classic uniform that they will wear against the Flames next month in Regina and which they will also wear two more times during the season.  Today is Fan Fest and here is the list of activities.

Note IV:  Reminder that the Illegal Curve Hockey Show won’t be on the air today but we return with our regularly scheduled show next Saturday at 9 am on TSN 1290 Winnipeg.

Ilta-Sanomat:  Patrik Laine is heading to Switzerland to train with SC Bern.  The article is in Finnish so you’ll wanna read it with Google Translate but the long and short is that the Jets RFA is leaving Finland for Switzerland as he remains without a contract.  Sami Hoffren adds that the Swiss coach indicated that it is for training purposes not playing.

Winnipeg Sun:  Experimentation at the top of Jets’ to-do list as camp opens.  With roster questions marks all over the place it is going to lead to some new opportunities.

Winnipeg Sun:  Wheeler says pressure, media reports took toll on him last season.  The Jets captain spoke quite candidly about last season and the impact it had on him.

Winnipeg Sun:  Jets need Laine, Connor back ‘right now’.  With the Marner news yesterday it will be interesting to see how soon the rest of the RFAs around the league start to fall.

Winnipeg Free Press:  Maurice remains calm before the storm.  (Paywall).  The Jets bench boss had a long chat yesterday to open training camp and Jason breaks it down.

Winnipeg Free Press:  Jets’ scorers dangerous from ‘safe’ areas of the ice.  (Paywall).  Interesting that Scheifele and Laine are able to generate from areas not particularly known for goal scoring.

TSN:  Ehlers turns focus inward in bid for bounce-back season.  While it will certainly help him it also apparently is impressing his teammates as Bryan Little’s comment today would suggest when told about Ehlers watching all 62 of his games from last season would seem to indicate “He’s a guy that cares a lot and that wants to be better every day and I can totally see him sitting down, watching games all summer long and studying it.  He doesn’t get talked about a lot but he loves to watch hockey and he’s definitely one of those kids who is a student of the game and likes to learn. That’s pretty cool to hear that and it shows how much he cares and wants to get better.”. 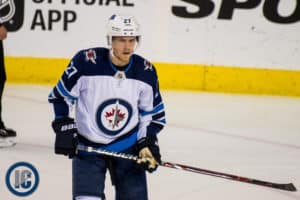 The Athletic Winnipeg: Five key questions the Jets need to answer heading into training camp. (Paywall).  Ken’s five questions include: 1) When will the RFA deals get done? 2) Who is the second-line centre? 3) How will the defence pairings shake out?  4) Which rookie will make an impact?  5) What’s the optimal number of starts for Connor Hellebuyck?

TSN:  Jets’ prospects have a chance to make an impression with Connor, Laine absent.  It’s next man up for the Jets when it comes to the Kyle Connor and Patrik Laine situation. With their two big RFA’s still working on new deals, Winnipeg will move forward through camp without them, which means there’s opportunity and ice-time up for grabs. Sara Orlesky has more.

Voice of the Winnipeg Jets on TSN Dennis Beyak joined Andrew Paterson and Rick Ralph on the Afternoon Ride. They discussed the start of Winnipeg Jets training camp, Dustin Byfuglien’s leave of absence from the team, the new look Jets defense group, Blake Wheeler’s comments to Sara Orlesky earlier this week and position battles to watch.

Winnipeg Jets alumni Jim Slater joined Andrew Paterson and Rick Ralph on the Afternoon Ride. They discussed his return to Winnipeg for Jets fan fest, his decision to retire, his post hockey career, a possible reunion with line mates Tanner Glass and Chris Thorburn and being a part of the Winnipeg community.