Will the Marner news break open the logjam with NHL RFAs? 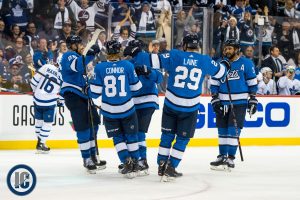 That is the multi million dollar question that folks across the NHL are asking themselves after news broke today that the Toronto Maple Leafs and RFA Mitch Marner had agreed to a six-year, 65.538 million dollar contract with an 10.893 AAV.

Of course the news folks around these parts are interested is what this means for Winnipeg Jets RFAs Patrik Laine and Kyle Connor.

Jets GM Kevin Cheveldayoff was keeping his cards close to his vest in his media availability this morning at the IcePlex as Winnipeg kicked off training camp without two of their premier scoring wingers.

As per Cap Friendly the Jets have $15,450,836 left in cap space.  The conventional wisdom continues to be that Patrik Laine will sign a short-term bridge and Kyle Connor a longer-term deal.

Will we need to see more movement before this happens?

Ken Wiebe and Murat Ates over at the Athletic Winnipeg have put out a number of articles (behind a Paywall) regarding the topic of contracts for these two:

Opportunity cost and a way for Winnipeg to exploit the ongoing Kyle Connor and Patrik Laine negotiations.

The road to new deals for Patrik Laine and Kyle Connor.

As has Mike McIntyre of the Winnipeg Free Press (also behind Paywall):

Jets playing hardball out of necessity.

As has Paul Friesen over at the Winnipeg Sun:

So now we wait and the question remains for how much longer?

We learned via Finnish reporter Sami Hoffren that Laine is heading to Switzerland to train with SC Bern and he added that the Swiss coach indicated that it is for training purposes only and not playing.