The first on ice session with group 2. 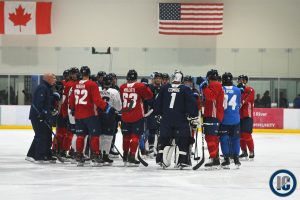 A few players skated earlier than the 12 noon start time as Andrew Copp, who was supposed to be skating with group 1 this morning, must be nursing something minor and wasn’t engaging in contact.  Also there was Skyler McKenzie who is recovering from offseason surgery as well as Sami Niku and Kristian Vesalainen, who according to Scott Billeck of the Winnipeg Sun, were involved in a car crash on Friday.

As per Ken Wiebe of The Athletic Winnipeg here are your lines and D pairs: