Note:  The Jets prospects bounced back on Sunday with a 2-1 defeat of the Habs prospects in the second game of the Rookie Showcase.  Tonight they will have a chance for revenge against the Senators prospects who beat them down 8-1 on Friday night as they close out the tournament tonight in Belleville.  Puck drop is at 6 pm and here is our game preview with lines, D pairs and starting goalie.

Winnipeg Sun: Jets Chevy not sweating Laine, Connor deals — yet.  Paul chatted with the Jets GM in Belleville one-on-one for 11 minutes on a number of topics.

Sportsnet:  Three biggest questions facing the Winnipeg Jets entering training camp.  To the surprise of nobody those questions are: 1) Will both Laine and Connor eventually return to the fold? 2) How will the team compensate for the loss of Jacob Trouba and Tyler Myers? 3) Can Connor Hellebuyck rebound?

The Athletic: Josh Morrissey’s increasingly crucial role with Jets next step on his climb toward the top. (Paywall). I’ve been on this train since the beginning as I saw a kid who both on and off the ice was exactly the type of player this organization would want from the start of his career to the end. 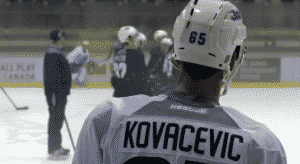 Montreal Gazette:  Jets soar to win over tired Canadiens in rookie tourney.  A look at the game from the perspective of someone who covers the Habs.

The Athletic Winnipeg: Opportunity cost and a way for Winnipeg to exploit the ongoing Kyle Connor and Patrik Laine negotiations. (Paywall). On the heels of the Hurricanes signing Jake Gardiner, Murat offers up his thoughts on how the Jets can make moves similar to Carolina in order to come out ahead.

Topics: Can Kyle Connor be the driver of a forward line, Clayton Keller’s eight-year contract extension with the Coyotes, Jake Gardiner signs a four-year contract with the Hurricanes, Joe Thornton signs a one-year deal with San Jose, Andrei Vasilevskiy says the Tampa Bay Lightning got too comfortable last season